There was an entry of  only 11 teams of trios for this innovative format that The RES DEV tournament manager, Jack Smith had introduced into this year’s tournament scene.

Even though there was a small entry due to the excellent backing from the sponsor, Jack was able to have a prize fund of £2130.

Jack’s original plan was to hold the tournament over 3 days on a bank holiday weekend earlier in the year, with a similar format to the “Scott Banks” Trios which was held for many years in memory of Scott at Merrion Centre, Leeds.

Unfortunately the BTBA would not give a sanction for this event as it clashed with the BTBA Senior Nationals, even though Jack had been planning this from way back in October 2018 or maybe earlier. So Jack altered the format to make it fit into a one day event.

The qualifying round was a 2 x 4 game block on 2 different lane conditions.
The first 4 games were played on the 42’ “Gateway Arch” pattern followed by a Lunch/Lane Dressing break.
The next 4 games were on the 44’ Shamshir pattern, with the top 8 teams with Senior bonuses going forward to a 4 game final on the 44’ Big Ben pattern.

Almost from the start the “Frankies Boys” team of Frank Lindsay, Andy Clough and Mike “Frosty” Halliwell we’re out to show their intention to win this tournament and dominated the qualifying round on both lane patterns.

THE FINAL
As in the qualifying round there was going to be only one winning team.
Frankies  Boys led the way from game one with an excellent 727 scratch first game.
Scunny Crew were the closest with a 650 scratch game.
Other games over par were Delta 621, Lefties Rule OK 608 and Krown Print 603.
In game 2 Frankies Boys extended their lead with another big game, 713 as Scunny Crew fell away with a 490 game, the lowest in the final.
Krown Print took advantage of this slip to move into second place with a 650 game.
Lefties Rule OK were steadily climbing the leader board with 605 as Delta’s 556 dropped them down to fifth place.
The RAF VETS Hurricane team’s 631 took them to 4th.

In game 3 Frankies Boys had 626 to maintain their domination of the day as Lefties Rule Ok were still steady with 597 and moved into second spot.
Close behind we’re Krown Print 585 and Delta stepping up a gear with 657.

At this stage going into the last game the leaders with bonuses were Frankies Boys with the next three teams over 200 pins behind.
However there were only 21 pins between 2nd, 3rd & 4th.

In the last game Frankies Boys’ 647 completed an excellent days bowling and Lefties Rule OK had a 622 to cement their 2nd place.
It was all change in positions 3rd, 4th, 5th as Krown Print’s disastrous 532 dropped them to 5th place and Scunny Crew remained in 6th.
Delta bowled 613 to take 3rd place and VETS Hurricane were the big movers from 6th to snatch their highest position of the day, 4th.

All 8 Teams in the Final cashed thanks to a very generous sponsorship from RES DEV (Resin Development Ltd) and  the first prizes 3 places were :- 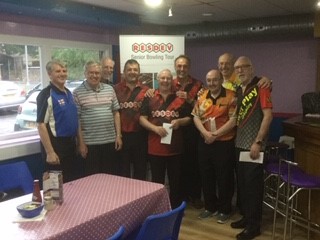 Carl Taylor became the youngest winner of a Resdev stop when he outpointed Mark Fullbrook and Ron Oldfield on his way to the title. Report by Jack Smith to follow Results Round 4 NAME BONUS […]

Sunday 24th June and the third stop of the Resdev Senior Tour took place at the ever popular Mansfield Superbowl. The format for this event would be the popular double Round Robin where the top […]

Sunday 28th July 2019 by Alan Turner 55 entries playing the traditional Senior format of a six game qualifying round with the top 16 going forward to a four game round two, with scores carried […]