The third stop on the 2018 ISBT tour was in France, at Cristal Bowling in Wittelsheim. 112 men and 28 women took part this year, the format for the tournament was two blocks of 6 games qualifying, with re-entries being allowed.

For those not able to qualify through the main leaderboard, there were additional opportunities through Turbo games and a Desperado squad. Age bonus started at age 51 (1 pin per game), then increased a pin for every additional year of age with no limit. As with all ISBT events, there was a separate division for ladies.

The opening squad on Thursday saw defending champion Christer Danielsson from Sweden start well, with 1425 including bonus, ahead of Hermann Wimmer from Germany. Martina Beckel from Germany too the top ladies spot with 1217, just ahead of Nadine Robert from France. The second squad on Thursday was won by Valentin Fatu from Romana with 1389. In the ladies’ section, Angie Brown from England led with 1226.

There were three squads on Friday, the first again went to Scandinavian bowlers, Petri Keituri from Finland was top with 1432, ahead of Ulf Lonngren from Sweden. English ladies led this squad, Kimberley Oakley had 1317, ahead of Angie Brown. In the fourth squad, there was more English success, with Ron Oldfield hitting 1424, ahead of Auke Brokehuizen from the Netherlands. Petra Duplois from Germany had a solid block of 1280 to secure the squad win.

The final Friday squad was won by Dominique de Nolf from Belgium with 1377, ahead of Jean-Pierre Paugnat from France. Pépita Jacques from France led the ladies with 1266.

Saturday had the final three squads, Helmut Ulber from Germany won the first with 1412, ahead of Hermann Wimmer, and Liliane Vintens from Belgium was top lady with 1254. Patrick Rolland from France took the second squad with 1479, ahead of English players Lol Ellis and Frank Stander. There were a number of good blocks in the ladies section, Brigitte Fievet from France had 1333, ahead of Martina Beckel, Marianne Pelz and Biance Völkl-Brandt, all from Germany.

With qualification over, it was a clean sweep in the overall rankings for England, with Ron Oldfield first, and Frank Stander second, an amazing result for Frank Stander bowling a 194 average at the age of 87 years old. In third place in the men’s qualification was Patrick Rolland. The top eight would get a bye into the second finals round, eighth place went to Valentin Fatu, with the final cut at 32 falling to Noël De Lazzer on 2638. 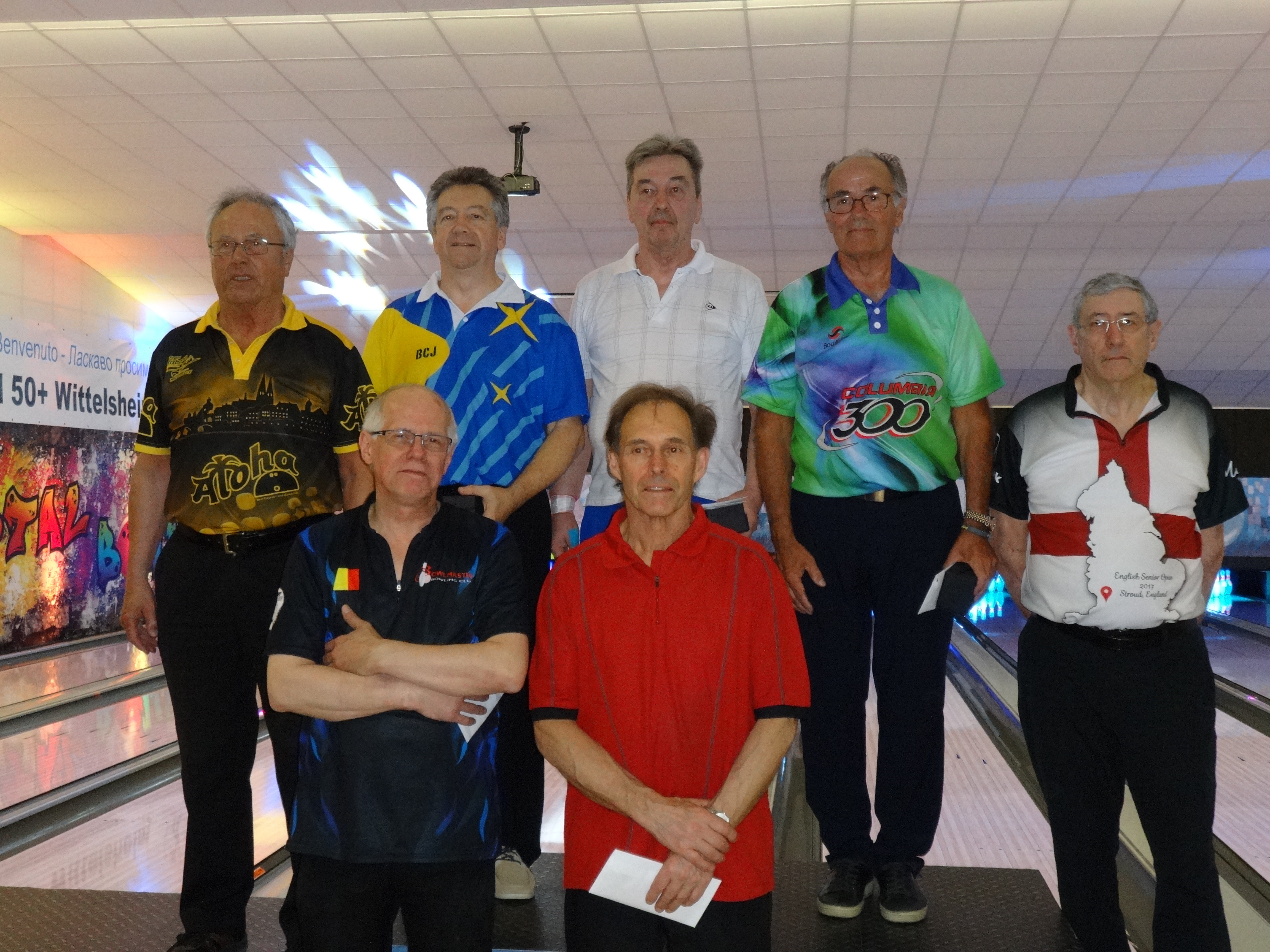 In the ladies division, Angie Brown finished top with 2583, ahead of Pépita Jacques and Martina Beckel. Last qualifier from the overall standings was Kimberly Oakley with 2495. 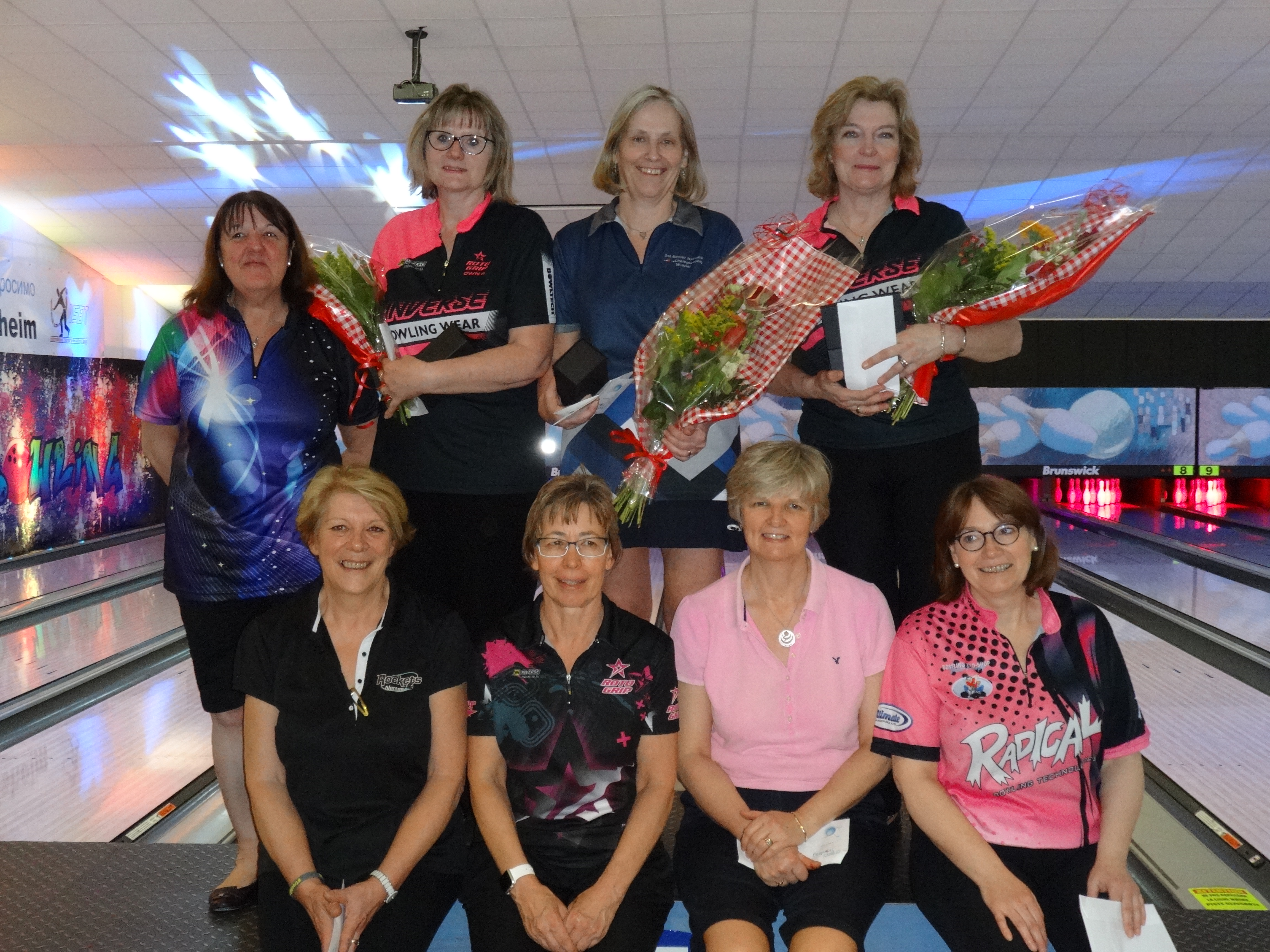 For those who had not qualified, the Desperado squad remained an option. Only 8 men and 4 women took part, the top two men and top lady would move forward to the finals. In the men’s section, Patrick Mochon from France started with the first seven strikes, while Robert Bruce from England had the first six. Both players had now done the hard work and closed the games out to qualify for the final stages. The ladies Desperado was very close, with Lynne Walker from Wales having a solid closed game to finish with 198 with bonus. Françoise Augustine from France was also having a solid game, and although her scratch score was not as good, she became the Desperado qualifier by a single pin including age bonus.

The quarter final round was five games starting from scratch. Timo Makelä was the comfortable winner with 1228, ahead of Roger Pieters from Belgium and Christer Danielsson. Only the top 16 would go forward, in this place was Noël de Lazzer from France with 1071.

The quarter final round saw the 16 bowlers from the previous round joined by the top eight from qualification. This round was another Scandinavian victory, with Ulf Lonngren and Timo Makelä leading. Only eight players would make the round robin final, eighth place was Helmut Ulber from Germany with 1149.

After 3 games of the men’s round-robin final, Lol Ellis had a slight lead over Patrick Rolland. In the next game they played each other, and a win for Rolland put him into the lead. However, Timo Makelä was now scoring strongly, and a 247 scratch average over the last four games gave him a comfortable victory over Patrick Rolland and Ulf Lönngren, the first ISBT podium finish for Timo Makelä.

In the women’s final, Angie Brown started strongest with a 265 first game, but Liliane Vintens was slowly pegging back the lead, and by the end of game 3 they were level. However, Angie Brown continued to score well and win her matches, and by the start of the last game had a comfortable 65 pin lead over the rest of the field. The last game started well from Angie Brown, but the last five frames were opened through splits or washouts, leaving her with a disappointing 159 game. Only Brigitte Fievet looked like she might take advantage of this with a 233 game, but in the end, it was only enough to finish 10 pins behind in second place, with Liliane Vintens in third, leaving Angie Brown to collect her 17th ISBT tour title.

The next stop is the Italian Senior Open at Reno Bowling, Bologna, Italy. The tournament runs from the 2nd to 10th June 2018. Full details are available at the ISBT web site, http://www.isbtbowlingtour.eu/

Angie Brown closes in on All Time Senior Winners List

By Alan Turner Wins for Angie Brown and Lol Ellis moved them both closer up the all time Senior list. Angie just three wins behind leader Brenda Pratt with 58 wins. Lol in fourth place […]

ISBT Masters Final 2018 Dream Bowl, Bőblingen, Germany 13th May 2019 Every year, the top competitors from the ISBT series of tournaments are invited to participate in the Masters Final. There is no entry fee […]