Three blocks again with three different patterns started with the 41′ Rome Pattern. Adam Cairns was the leader for the block with 1290 placing him 4th overall combined with the first weeks play. Second was Adam Shrubb with 1267 and third was Frank Stephenson with 1202. For the women it was Vicki Harman leading the way with 1125 and good enough for 4th overall. Second in the block was Samantha Hannan with 1086 and third was Sarah Hood with 1073.

The second pattern of the day was Rome 38′ and the leaders at the end of the block were Charlotte Rathbone with  1122 and Jamie Bottomley with 1232.
Adam Cairns and Vicki Harman continued to lead on overall pinfall, with all points still to be added at the end of the final pattern – Mexico City 43′. Still lots of points to play for at this point.

The final squad of the day was bowled on the 43′ Mexico City pattern and Chris Oates out on top this time in the mens division and up to 5th overall as Vicki Harman headed the women in the final block and placed second overall. After two weekends of play it was Dominic Barrett and Natasja Ailes holding their postions to win the trials and a place in the national team for the next two years. 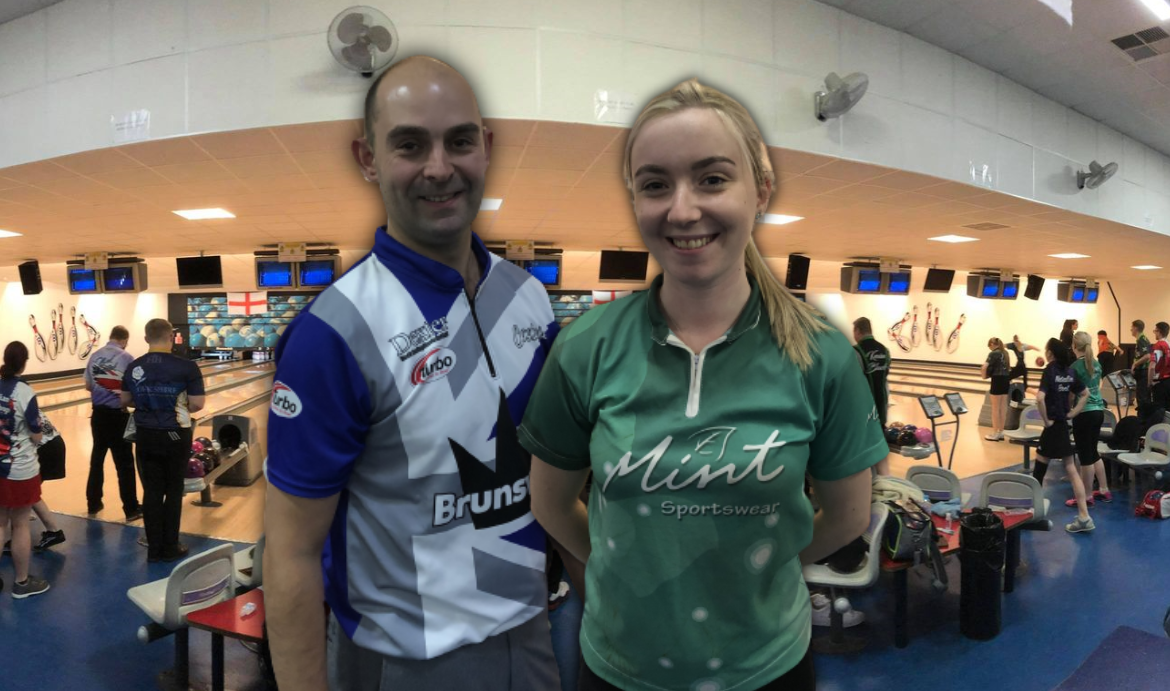 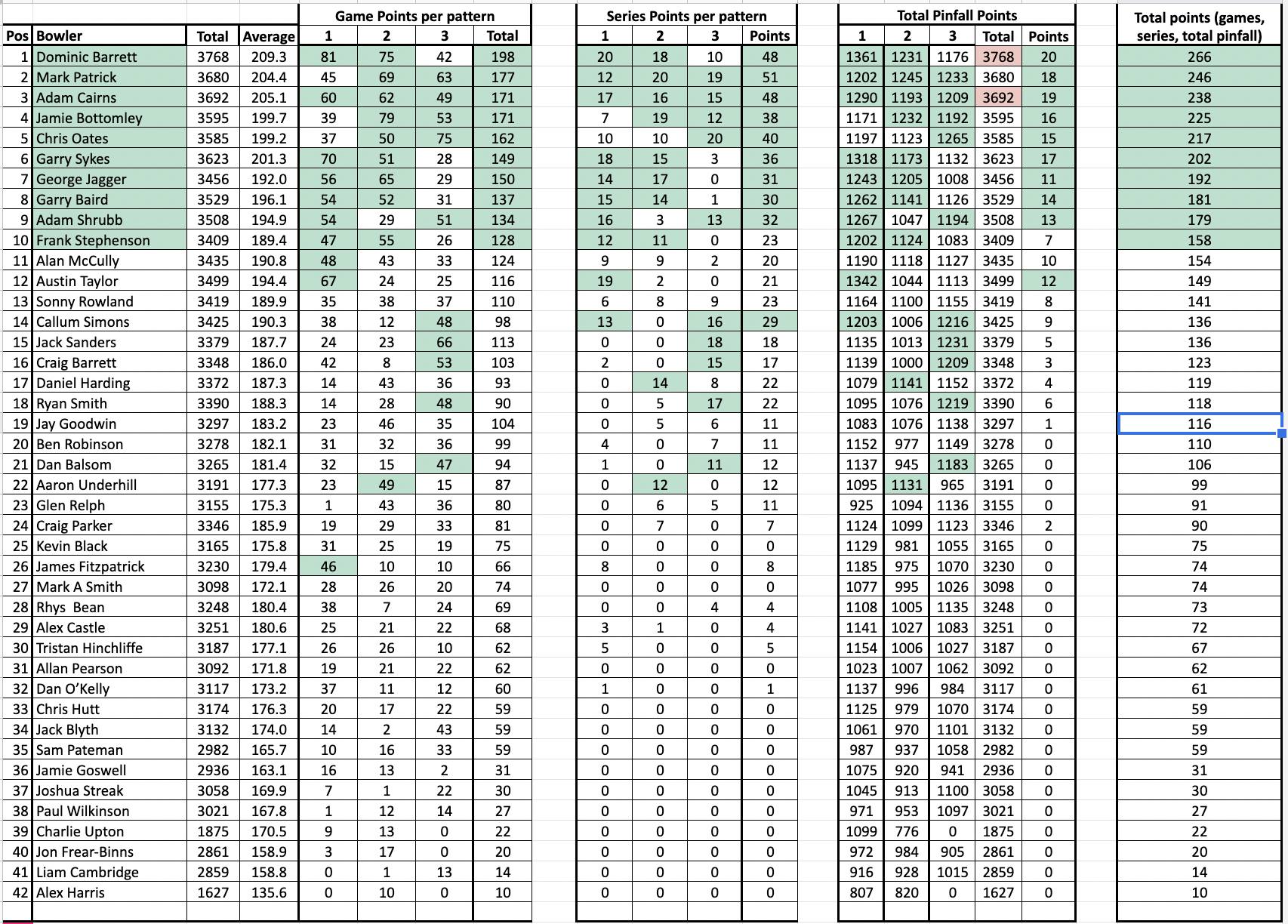 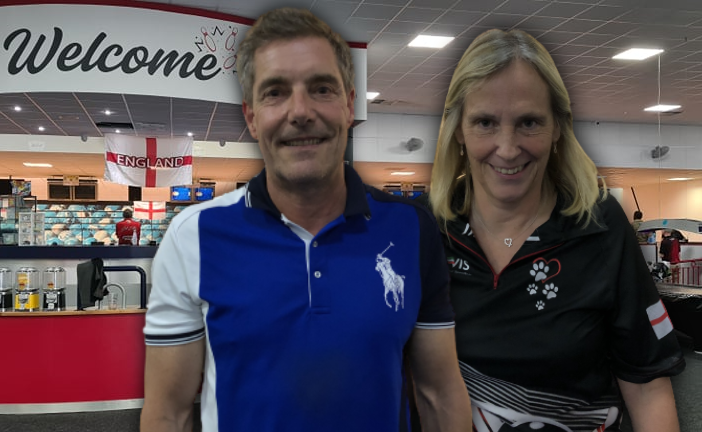 Jeeves and Brown take the crown

The second weekend for the seniors and a chase for a place in the top 10 saw Steven Jeeves and Angie Brown win on both patterns for the day and landing in first place overall. Colin Grose and Kim Oakley in second and Lol Ellis and Sandra Symmonds in third after both weekends.

Attached are the provisional combined results from the last two weekends . These are subject to final review by the Head of Team England and will be confirmed later this week on the BTBA website. 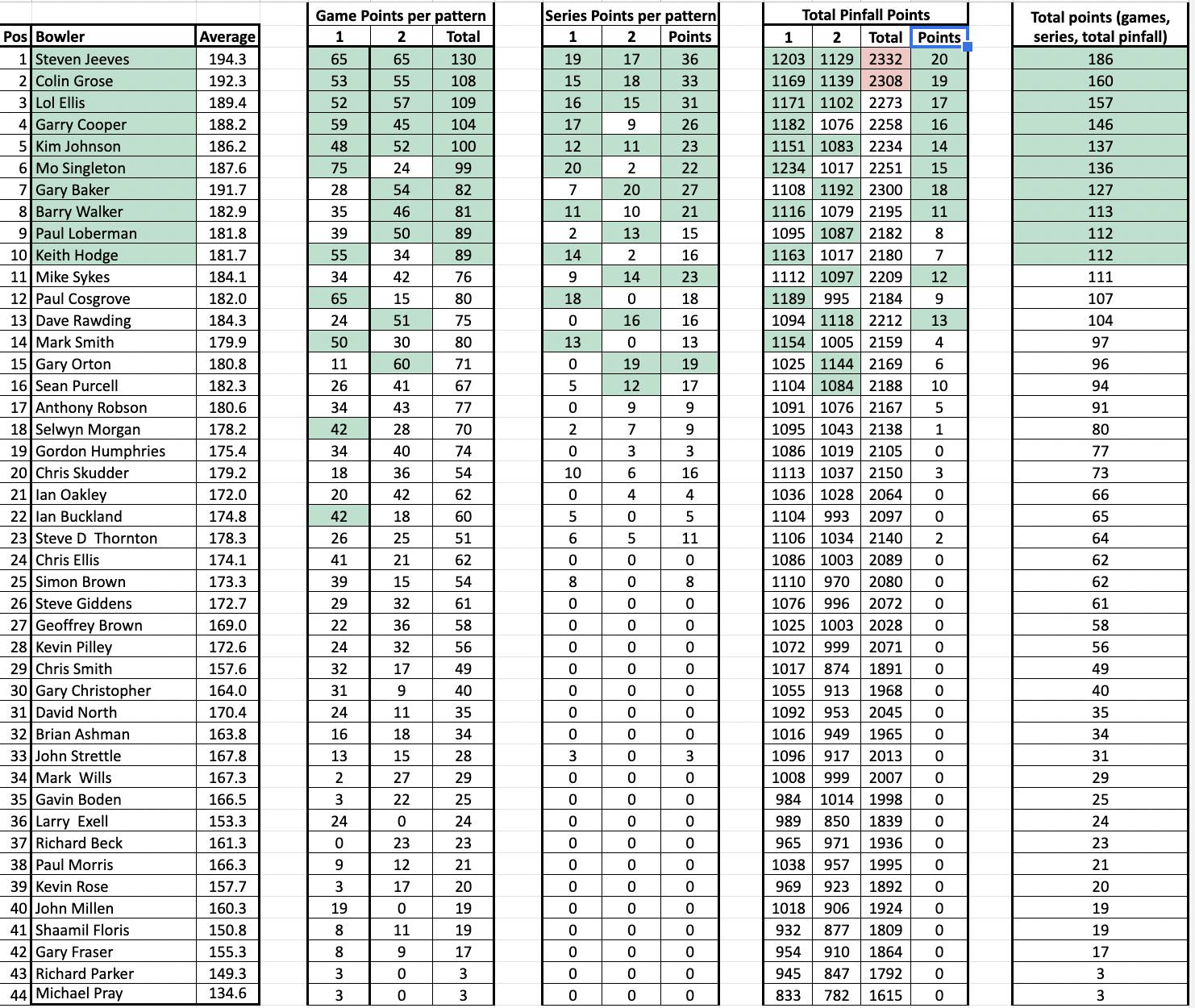 Three blocks with three different patterns started with the 41′ Rome Pattern and no shocks to see Weber Cup captain and English legend Dominic Barrett leading with 1361 followed by Austin Taylor with 1342 and in third was Garry Sykes with 1318. For the Women it was Natasja Ailes in pole position with 1184 followed by Gemma Tsappis with 1178 and Elyse Giddens with 1138.

The second block brought the 38′ Los Angeles pattern and some lower scoring. For the men it was Mark Patrick top with 1245 as Dominic Barrett placed second with 1231 and third was George Jagger with 1205. Dom still out in front after two blocks with Garry Sykes moving into second overall and George Jagger up to third. Elyse Giddens took the top spot for the women with 1103 followed by Natasja Ailes with 1080 and Eve Giddens with 1055. Natasja holding the top spot overall from Elyse Giddens and Gemma Tsappis.

The final squad of the day was bowled on the 43′ Mexico City pattern and again it was Mark Patrick on top, this time with 1223 followed by Ryan Smith with 1219 and Callum Simons with 1216. Dom holding off all to lead after the first weekend with 3768.  Hannah Ailes took the womens last block with 1139 with Natalie Boot second with 1111 and Jackie Wyatt third with 1104. Overall winner for the day and leader after first weekends play was Natasja Ailes with 3361. 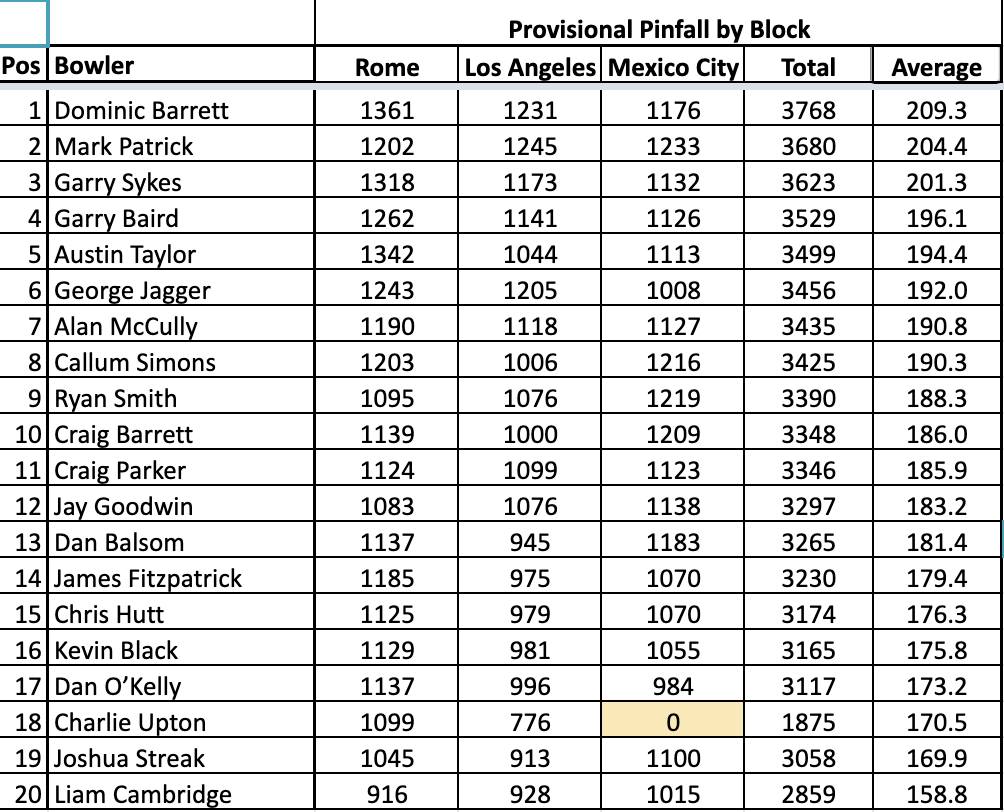 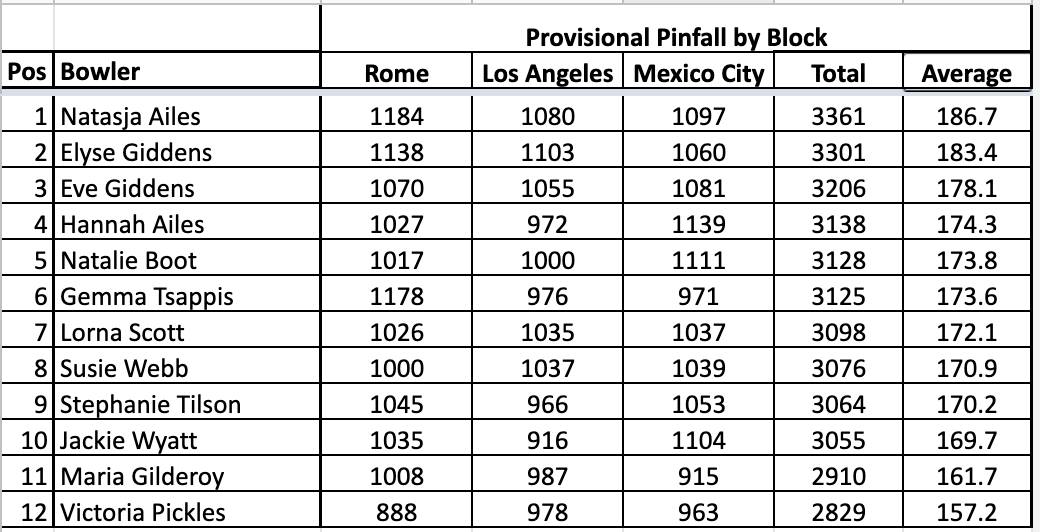 Congrats to Colin Grose and Kimberley Oakley for topping the standings on pinfall today.
Another squad will play next Saturday and then points will be awarded based on Top 20 each game, Top 20 series (each pattern), and Top 20 overall pinfall. 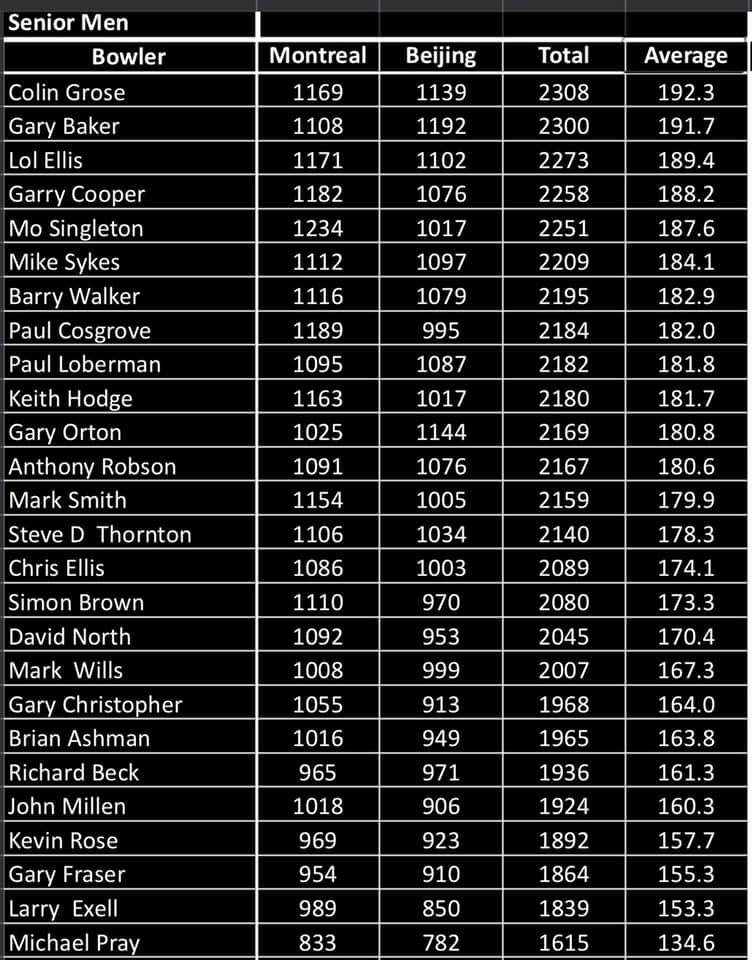 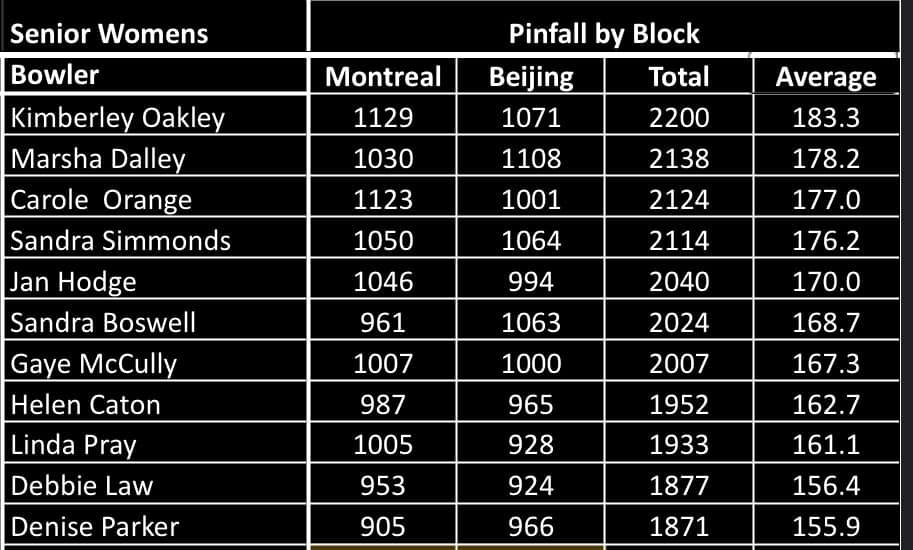 Click for the latest squad lists and lane patterns

Click for the latest squad lists and lane patterns

If there is one job in UK bowling that looks difficult at the moment it is the person who coordinates tournaments. At this very moment it is hard to see how anything is going to […]