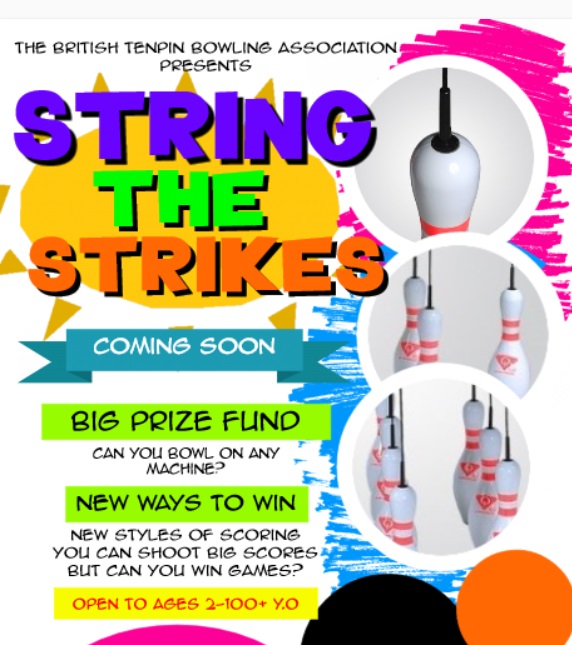 BTBA to launch a new string tournament in 2019.

String the Strikes will bring new formats using the exciting BESX scoring system from QubicaAMF and held in multiple string alley locations around the United Kingdom.

The national association have been working on a project to embrace String bowling starting in 2019 in a series of bowling tournaments using the latest String Machines that have been installed around the United Kingdom. This is BIG NEWS we thought so we contacted the BTBA and spoke with Martin Webster.

“We keep hearing many bowlers will not play on string machines but will they for big prizes?” he told us, adding

“Soon bowlers will realize, competition can be played on traditional and string technologies and it is fair for everyone.

Details on the new formats and all the ways you can enter will be published in the coming months.

This could be very interesting to find out which bowlers can win on both Traditional and String technology and who can ultimately be called the BEST!!

Have a safe and Happy Easter from the PBA!

The NAYBC has announced the Youth Bowling Calendar for the 2018/19 season.

Top Rank Old Trafford Manchester was the venue for the fourth BTBA National Championships in the mid sixties. BTBA president Lord Essendon opened the event stating “It is fitting that our championships should be held […]

READ – Which Women were the trailblazers in UK Bowling?

Women have been a massive part of bowling as a sport on our shores. They have won some amazing medals in all the major championships and continue to be a force on the lanes both […]