The second stop on the 2017 ISBT tour was in France, at Cristal Bowling in Wittelsheim. 101 men and 26 women took part this year, the format for the tournament was two blocks of 6 games qualifying, with the lowest block optionally being replaced by a better re-entry score.

For those not able to qualify through the main leaderboard, there were additional opportunities through Turbo games and a Desperado squad. Age bonus started at age 51 (1 pin per game), then increased a pin for every additional year of age with no limit. As with all ISBT events, there was a separate division for ladies.

The opening squad saw a strong start from the Scandinavian bowlers, with Christer Danielsson (Sweden) opening with 1457 over his 6 games including age bonus, ahead of Petri Keituri (Finland). Angie Brown (England) took the opening squad in the ladies section with 1165. The second squad of the day saw another Scandinavian leader, this time Inger Gabrielsen (Sweden) with 1499. Christiane Clerc (France) had a good 1223 block to lead in the ladies section. 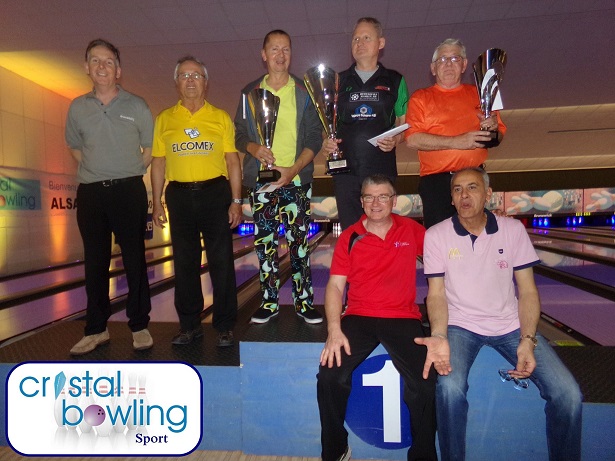 The first squad on Friday was again won by Christer Danielsson with a slightly improved 1462, just ahead of Steven Jeeves (England). Christiane Clerc also improved with 1276 to consolidate her position at the top of the leaderboard. There was additional prize money to those who were in the top three positions after this squad, with Christer Danielsson and Christiane Clerk taking top positions.

The second squad of the day saw André Geelen (Belgium) post the highest block of the tournament so far with 1585. In the ladies section, there were high scores from Brigitte Fievet (France) with 1297, and Sue Abela (Malta) just 7 pins behind. Robert Vallons (Belgium) won the last squad of the day with 1351, in the ladies division Pepita Jacques (France) bowled well for a 1302 total.

There were three squads on Saturday, the first was won by Georges Torok (France) with 1397, Nadine Lavrut (France) had 1250 to top the ladies section. The second squad saw some high scoring, with Patrick Rolland (France) leading with 1505, ahead of Berny Stőckl (Germany) with 1488. In the ladies section, Bigi Manico (Switzerland) had a strong block of 1312 to slot her into the last qualifying place. She also had a 285 Turbo game, so looked certain to qualify one way or the other. Brigitte Fievet had another good block of 1312 to lead in the overall standings. The final qualifying block was won by Laya Djouad (France) with 1422 to secure his place in the finals. There were good blocks in the ladies section from French players Jacqueline Faure and Nadine Lavrut to secure their places in the finals, pushing Bigi Manico down to 7th place and out of the qualifying list, but the highlight of the squad was a perfect 300 game for Isabelle Chevet (France), which gave her the sole ladies Turbo qualifying place, pushing Bigi Manico totally out of the finals. 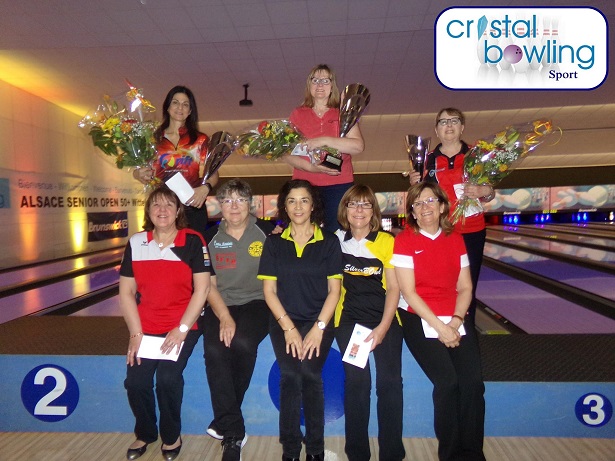 The top male qualifiers were André Geelen (2937), Christer Danielsson (2919), and Partick Rolland (2903). The top eight would miss the first final round, eighth place was Berny Stőckl. Last qualifier in 32nd place was Gary Barlow (England) with 2651. Behind Brigitte Fievet in the ladies section was Sue Abela and Pépita Jacques (France)

For those who had not qualified, the Desperado squad remained an option. 13 men and 4 women took part, the top two men and top lady would move forward to the finals. Scoring was not particularly high in the men’s section, and Laurent Quittelier (France) and Uwe Tscharke (Germany) were the men’s qualifiers with 235 and 225. Nadia Goron started strongly, and her 222 couldn’t be beaten, to make seven of the eight lady finalists coming from France.

28 men played the quarter final round, which was five games starting from scratch. Carlo Greulich (Germany) led with 1240, ahead of Alan Keddie (Scotland). In the semi-final round, all the top bowlers were now competing, and in the 3rd game, there was not one but two 300 games, coming from Ron Van Den Bogard (Netherlands), and Carlo Greulich. These two would win the round, ahead of Christer Danielsson. The top eight men then went forward to a round robin final.

In the men’s final, Christer Danielsson started strongly, and won six of his seven matches to stay ahead of the field for his second successive ISBT win, ahead of Carlo Greulich and Roger Pieters. In the women’s final Nadine Lavrut started best with a 276 first game, but was then slowly overhauled by Brigitte Fievet and Sue Abela, with Brigitte ending a comfortable winner.

The next stop is the Paris Senior Open at La Factory, Moussy Le Neuf, France. The tournament runs from the 24th to 28th May 2017. Full details are available at the ISBT web site, http://www.isbtbowlingtour.eu/