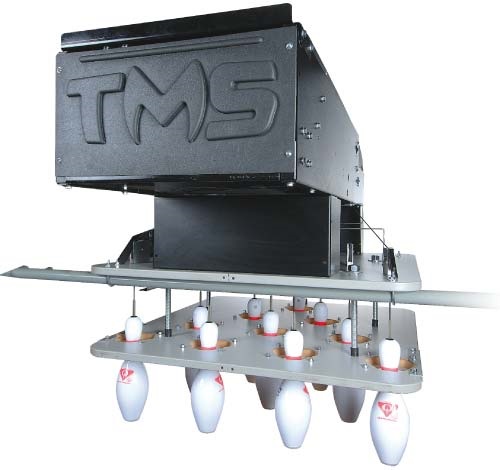 Imagine this. Customers really like the idea of lower maintenance and cheaper running costs when selecting new capital equipment for their new bowling centre.

It gets to a point where the string machines are out selling the traditional free fall machines by at least 5-1 or more on new centre builds.

Major chain’s Worldwide look at the cost of replacing mechanical machines and find in some cases it will cost them too much and in others with older or obsolete machines they decide to make the jump.

All this time the sport of bowling shrinks as centres open or convert to a code of bowling at the time of writing has no official sanction or governing body. The ‘Pins on String’s thing is frowned on by the bowling community as a whole.

Creation or evolution?
Herein lies a dilema for the creators of bowling or at least the people who make it possible for the World to bowl. The very people who give Ten Pin bowling life are also inadvertently changing the way the game might be played in the future. Unless String bowling is accepted and sanctioned by the World governing bodies it becomes a pure entertainment form of the sport with no official set rules, codes or otherwise. It could also become a breakaway sport with a new World Federation? Arcade bowling anyone?

The two major creators of equipment for the sport are also caring supporters of the sport of bowling and have been since the very start, They did not only just install equipment in every city and town across the globe they also heavily invested in encouraging the new leisure activity as an actual sport. Both the big two sent qualified staff around the World to teach the bowlers how to bowl, how to run leagues, Drill balls, run tournaments and just about everything bowlers take for granted today.

When bowlers moan of the ‘Proprietors killing the sport’ with lost leagues and sub standard playing conditions it is not the creators of the sport that are to blame. But in reality, if String machines take over on the business side, it well could be.

Bowling On a String by Paul Lane

In recent years string pinsetters for tenpin bowling have been featured in editorial stories and advertising pages in the bowling industry trade and consumer publications. Not surprisingly,string pinsetters have gotten a mixed response from bowlers […]

BTBA to launch a new string tournament in 2019. String the Strikes will bring new formats using the exciting BESX scoring system from QubicaAMF and held in multiple string alley locations around the United Kingdom. […]

Following a number of recent announcements regarding the installation of String machines in the UK, the Executive Council of the BTBA have decided, after extensive research and discussions with other international associations and manufacturers, to […]