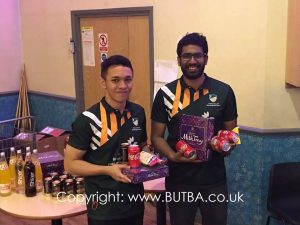 The fifth ranking stop of the 16/17 season was hosted by the University of Birmingham at Nuneaton. A staple tournament on the BUTBA tour incorporating baker games into the qualifying, with mixed student and ex-student teams allowed.

The day saw 8 teams enter, three from Nottingham, two from Birmingham and three ex-student teams, with the top four team scores with handicap progressing to a baker round robin final. Qualifying consisted of three sets of 2 games of conventional doubles followed by a baker game, moving lanes after each set. 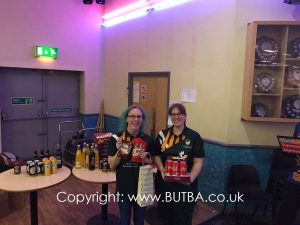 Richard Bilton from Nottingham got off to a flying start with a 205 scratch game, giving Nottingham C an impressive 525 handicap doubles game. Meanwhile the rest of the competition struggled to make 170 on what turned out to be some pretty dry lanes. There were two more scratch 200s from Ross Lewis and Laura Elliot (both from Birmingham) in the second doubles game, but the scores still remained low for the day with most people sitting around the 160 mark. In the first baker game the students struggled to string the closed frames together, while ex-student teams of Kian Mistry and Sarah Hood, and Saqib Shabbir and Tom Hutchinson stormed ahead with 190 and 186 respectively.

A lane move and all the teams were back to conventional doubles for two more games. Nottingham started to dominate this set with all three teams putting in 500+ handicap doubles games. Birmingham A (Ross Lewis and Roshni Patel) then struck back with a 528 before the next baker game. This time it was ex-student team James Horwood and Josh Hewitt who managed to top the pack with a 167.

Spirits were high as the teams changed lanes for the final set of qualifying. Nottingham C (Mark Thompson and Richard Bilton) continued to lead the way putting in yet another 500 handicap doubles game, with Richard’s third scratch game over par for the day. Laura Elliott was also giving Sarah Hood a run for her money in the ladies average shooting a massive 224, putting her 30 pins clear. In the final conventional doubles game Sarah managed to hit back with a 215 while Laura only managed a 140. None of the teams broke the 500 barrier with handicap in the last game, with Notts C coming close with a 492 and Kian and Sarah putting in a respectable 494. The last baker game saw Kian and Sarah top the pack again with a 169, leaving them 216 pins clear scratch, but only in fifth place with handicap, therefore failing to make the round robin finals by 37.

After qualifying the top four teams with handicap were Nottingham C – 3683 (Mark and Richard), Birmingham A – 3514 (Ross and Roshni), Nottingham B – 3463 (Hannah Richards and Katie Lewis) and Nottingham A -3456 (Faris Husaini and Faadil Fawzy). They all progressed to a baker doubles 1 game round robin handicap final.

Nottingham B were carrying a massive 125 team handicap but it wasn’t needed as they faced off against Nottingham A to start, shooting an impressive 253 handicap game against the A teams 201, beating them scratch as well. Meanwhile the Birmingham team were able to keep Nottingham C at bay winning 221 v 217.

The girls from Nottingham B then faced off against Mark and Richard of Nottingham C, again not needing the extra handicap and winning 252 v 199 handicap. Meanwhile Birmingham had a scratch game on their hands with both them and Nottingham A having 92 team handicap. It was a close match and Birmingham fought hard, but lost their second match 111 v 129.
Going into the last match undefeated Nottingham B were the team to beat, while top qualifiers Nottingham C were yet to get any points on the board. It was down to Birmingham to try and beat the Nottingham ladies and while they tried their hardest putting in a 130 scratch game, it wasn’t enough with handicap. Nottingham B took a clean sweep winning 222 v 235 once handicap was added.

The main aims of BUTBA are to promote the sport of Tenpin Bowling, to increase participation at student level across the country and to provide an environment in which bowlers studying in higher education can compete fairly and safely. BUTBA also provide a playing environment for those who have graduated, with recent (or not so recent) alumni being eligible to compete in the ex-student bowling tour, which runs alongside the student one. You do not need to have competed as a student, or have studied at a university with a current student team to take part in the ex-student tour. To find out how you can get involved, email committee@butba.co.uk.

This month we’re featuring Curtis Hooper from LSU Ten Pin Bowling Club 2016/17.   Curtis is still studying, but has risen to the top of the ranks in Youth Team England, representing his country across […]

The final event of the BUTBA season is the invitational masters event. It is run over three divisions (mens scratch, ladies scratch and handicap) pitting the best of the students against the best graduates who […]