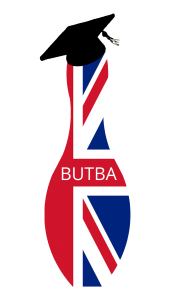 Old and new battle it out at Nottingham

On Saturday 25th February 27 students and 15 ex-students made the trip to MFA Nottingham to contest the annual Championships. By the end of the day four teams and six individuals would be claiming victory in both scratch and handicap divisions. All teams would play games in singles, doubles and team formats, with the students forming teams of four and the ex-students teams of three. Once the team games were bowled the top 24 bowlers would progress to the individual low man drop finals.

On the student’s side Sheffield and Loughborough were both fielding one team, with Birmingham gathering two teams and home side Nottingham entering three teams. The singles and doubles were to be played on Broadway (37ft) and unsurprisingly Team England star Curtis Hooper bowling for Loughborough was leading the field after the singles finishing 41 over for three. Also worthy of note were Nottingham B (Faadil Fawzy, Katie Lewis, Tim Masiko and Hannah Richards), Ross Lewis and Ali Ryall from Birmingham A and James Thacker and Emma Coulthurst from Nottingham C who all beat their entering averages on a less than easy pattern.

Nottingham B kept up the pace in the doubles as well, again all finishing above their entering averages. This meant that after 6 games they were a massive 56.8 pins above their team average and 277 pins in the lead for the handicap team results. Meanwhile Sheffield were in the lead on the scratch pinfall with 3820.

In the Ex-Student singles the entrants were struggling with the short pattern, many failing to make their entering averages with Damian Gray being the only contestant to finish over 200 par. Things didn’t improve much through the doubles with a tournament average of just 168.7 after 5 games. By lunchtime it was Just Twat It that were comfortably in lead for the scratch title with 2869, while the handicap placings were much closer with three teams separated by only 20 pins.

After lunch the students played their remaining team games on a house shot, while the Ex-Students swapped to Route 66 (45 ft). Loughborough, who were chasing Sheffield for the scratch title put in strong games of 632, 762 and 714, only to be matched with games of 659, 727 and 616. Luckily for Sheffield the big push by Loughborough wasn’t enough as they fell short by 63 pins. In the handicap Nottingham B continued to dominate finishing 277 pins ahead of the competition.

Meanwhile the Ex-students team event saw most competitors continue to struggle to make average, except for the scratch leaders (Damian Gray, Chris Herbert and Lee Burrows) who put in a massive 647 in their second game, which combined with a 550 and 487 put them clearly in the lead by a measly 421 pins. The handicap was won by A Team With No Name (Tom Chuter, Simon Atkins and Adam Maxwell) who had respectable handicap team games of 631, 651 and 669. At the end of qualifying only one entrant had played to their average so congratulations to Sarah Hood on that achievement.

After the qualifying it was time for the individual finals. In both the Student and Ex-student tournaments, the top 4 scratch men, top 4 scratch ladies and the remaining top 4 handicap bowlers from all remaining entrants would go on to contest for individual titles.

The student scratch male top seed was Curtis Hooper, last year’s defending champion. In the ladies, last year’s runner up Phillipa Relf (Loughborough) qualified in third while last year’s handicap champion Sam Ratcliffe (Nottingham) failed to make the cut. In a shock twist, Curtis was knocked out in the first round, only managing a 153, leaving 2 Sheffield players and Paul Marks from Manchester Metropolitan. The Sheffield duo of Darren Ellis and Abdullah Al-Tamimi made it through in the second round for a Sheffield head to head final. In the end Abdullah won by the narrowest of margins 198-202.

The ladies saw two Birmingham, one Loughborough and one Nottingham student make the cut, however victory for Birmingham’s Laura Elliott was never in doubt, cruising through her finals with games of 184, 185 and 176. Meanwhile in the handicap final Ross Lewis was the sole Birmingham student in a quartet filled up with Nottingham players. Not to let this intimidate him, Ross scraped through the first game in third place beating Faadil Fawzy (who had bowled 18 pins above average in qualifying) 246-238 with handicap. Ross took charge in the next game however, shooting 280 with handicap, a full 39 pins ahead of James Thacker who had just bowled a PB in the preceding game (204). In the final Ross faced James with a 19 pin deficit on handicap, but as nerves appeared to get the better of James, Ross shot 141 to James’s 120 to take the handicap game, and the Championship, by just 2 pins! 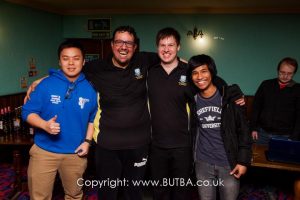 In the Ex-Student finals there were only three lady entrants so all three made the individual finals, and only had to play two games for the win. Defending champion Sarah Hood qualified top, and dominated the competition, knocking out Warwickshire’s Nicky Donowski in the first game and then beating Nikki Stam 186-142 in the second game. Meanwhile in the scratch men’s final, all three team members from the scratch winner’s team made the final, with Tom Chuter from the handicap winner’s team making up the final four. Another shock upset saw high seed Damian Gray knocked out in game 1 with a 151, unable to recover from having left 5 splits in the game. The second match saw Tom secure his place in the last match with a 197, while Lee Burrows knocked out teammate Chris 175-167. In the final game, Tom struggled with the lanes and just couldn’t keep up with Lee who won 203-142. 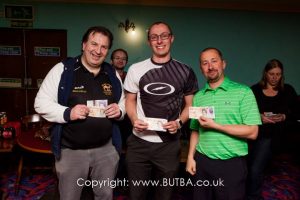 In the handicap finals male scratch runner up from last year Martin Townshend was joined by Simon Atkins, Tom Hutchinson and Adam Maxwell. Fourth seed Adam wasn’t able to keep up with the pace and exited in the first game with a 166 handicap game. The next match saw third seed Martin knocked out, leaving a head to head show down between the top two handicap qualifiers. Unfortunately for Tom, Simon found his mark for this final game and shot 219 scratch for a 280 handicap leaving him over 50 pins in front.

The main aims of BUTBA are to promote the sport of Tenpin Bowling, to increase participation at student level across the country and to provide an environment in which bowlers studying in higher education can compete fairly and safely. BUTBA also provide a playing environment for those who have graduated, with recent (or not so recent) alumni being eligible to compete in the ex-student bowling tour, which runs alongside the student one. You do not need to have competed as a student, or have studied at a university with a current student team to take part in the ex-student tour.

Nottingham Dominate at Nuneaton Baker Doubles The fifth ranking stop of the 16/17 season was hosted by the University of Birmingham at Nuneaton. A staple tournament on the BUTBA tour incorporating baker games into the […]

This month we’re featuring Curtis Hooper from LSU Ten Pin Bowling Club 2016/17.   Curtis is still studying, but has risen to the top of the ranks in Youth Team England, representing his country across […]

The final event of the BUTBA season is the invitational masters event. It is run over three divisions (mens scratch, ladies scratch and handicap) pitting the best of the students against the best graduates who […]