In the Knockout Finals it was brother versus sister (Grant and Lauren Dugan) and husband versus wife (Alan and Isobel Smith) with Lauren striking out in the Final to defeat Alan.

The next ranking event will take place on the 9th March in Dundonald International Ice Bowl on Kegel’s Taj Mahal. Registration 9-9.20am.

Taking place on the 9th April after the conclusion of the ranking event in Dundondald International Ice Bowl, now more than ever its important that voting members turn up and use their vote at the AGM. The AGM will see a new President being elected – a pivotal role for ensuring the success and development of our sport.

We will be covering the news live on the NITBF Facebook page of who is elected to the position of President along with the positions of Vice President, Secretary, Treasurer and Council members.

It was with great sadness in March that we learnt about the passing of two of our bowlers and friends – Barbara Fowler and Earl McComb. They will both be greatly missed and our thoughts are with both families at this sad time. 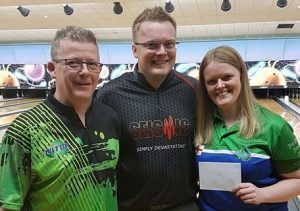 Inception Event 7
On the 26th March Evolve Bowling once again seen increasing numbers participate, with the event made up of ranking tour, league and public bowlers. Inception Events really are a great way to encourage more people into our sport.

For this Inception Event bowlers were competing on Kegel’s Dead Man’s Curve. After 6 games of qualification it was Grant Dugan and Kenny Donnelly who advanced to the scratch semi finals with Tony O’Hare waiting in the Final. In the Handicap semi finals it was birthday girl Lauren Dugan who took on Scott Horton with David McKeown waiting in the Final.

All the Semi Finals and Finals were won 3 legs to 1 with Tony O’Hare and Lauren Dugan emerging as the Scratch and Handicap winners respectively.

Earlier in March, Evolve Bowling were the first to break the news that Dundonald International Ice Bowl was evolving and having QubicaAMF’s BesX installed and new furniture fitted. Work is currently underway in the centre. Of course we have plans in the making to ensure that all the features available in BesX are used to their full potential….along with a couple of other plans!

David Seay holds high average of 233 and high game of 290, while Billy Nimick has the high series of 806. The current league average of the A Division is 211 after 21 weeks.

The Monday Singles will not be taking place on the 10th, 17th and 24th April due to Dundonald International Ice Bowl getting refurbished to go along with the newly installed QubicaAMF BesX!

After 8 weeks of the Monday Singles league in Brunswick Moviebowl it’s Lyn Watson leading the way on 48 points, ahead of Caroline Horan and Kev Horton in joint second place with 32 points, followed by Paul McCauley in third with 28 points.

The two divisions have been finalized for the 7th edition of the QubicaAMF Bowling Promotion Cup to be held at three venues in France, Nantes for the Team Challenge, Rennes for the Singles and Demain […]

Why you should be bowling anytime and everywhere?

Bowling is a sport and bowling is fun, so go Bowling #bowlingeverywhere