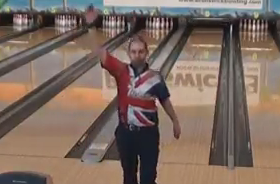 Barrett opening with a double took a two pin lead by frame 3 and an open frame by the Thai star in frame four opened a door for Barrett. A fourbagger after the open gave the Thai some hope as Barrett looked to close out the match. Barrett trailing by seven pins going into the 7th frame both players were on strikes. Barrett then found himself needing to keep striking as Yannaphon took the string of strikes to five. Disaster struck in frame 10 for the Thai with a split to end with 221 handing the title to barrett who needed a mark at least. The Englishman hit the first and punch the air in delight rounding out with 237-221.

The 14th Brunswick Euro Challenge is the third stop on the 2017 European Bowling Tour and the second and last EBT “Platinum” events this season, the highest of the five EBT tournament categories (platinum, gold, silver, bronze and satellite).

The BEC, which also kicks off the World Bowling Tour 2017, will be held from March 18-26 at Dream-Bowl Palace in Unterföhring in suburban Munich, Germany, the biggest bowling center in Europe with 52 lanes.

Women receive 8 pins handicap each game (up to 292 – maximum score is 300), an equality handicap provided to women in all EBT events. The top three women after qualifying receive 1,200, 700 and 500 Euro bonuses, respectively.

The Polish Open, which was supposed to be conducted late July in Wroclaw, is cancelled by the organizer due to relatively low participation numbers the first two years of its existence and an actual lack […]

Being female is not a handicap, it’s a bonus

By Helen Tamblyn-Saville, BTBA Communications Manager & Chair of Women’s National Council Tenpin bowling is a great sport. One of the things that makes it so great is the community. Yes, bowlers argue, disagree, moan. […]