Malta is only 122 square miles in area and a population of just over half a million people. They mostly follow Football but have training facilities for many other sports on the island and one being bowling. The 20 lane Eden Superbowl in St Georges Bay, St Julians has become famous in European bowling over the years thanks mostly to the Malta Open Championships held in June each year. Thanks to this yearly visit by a host of top European bowlers, the home players were able to compete against the best and produced many fine bowlers who would also beat everyone and win the Home Open. 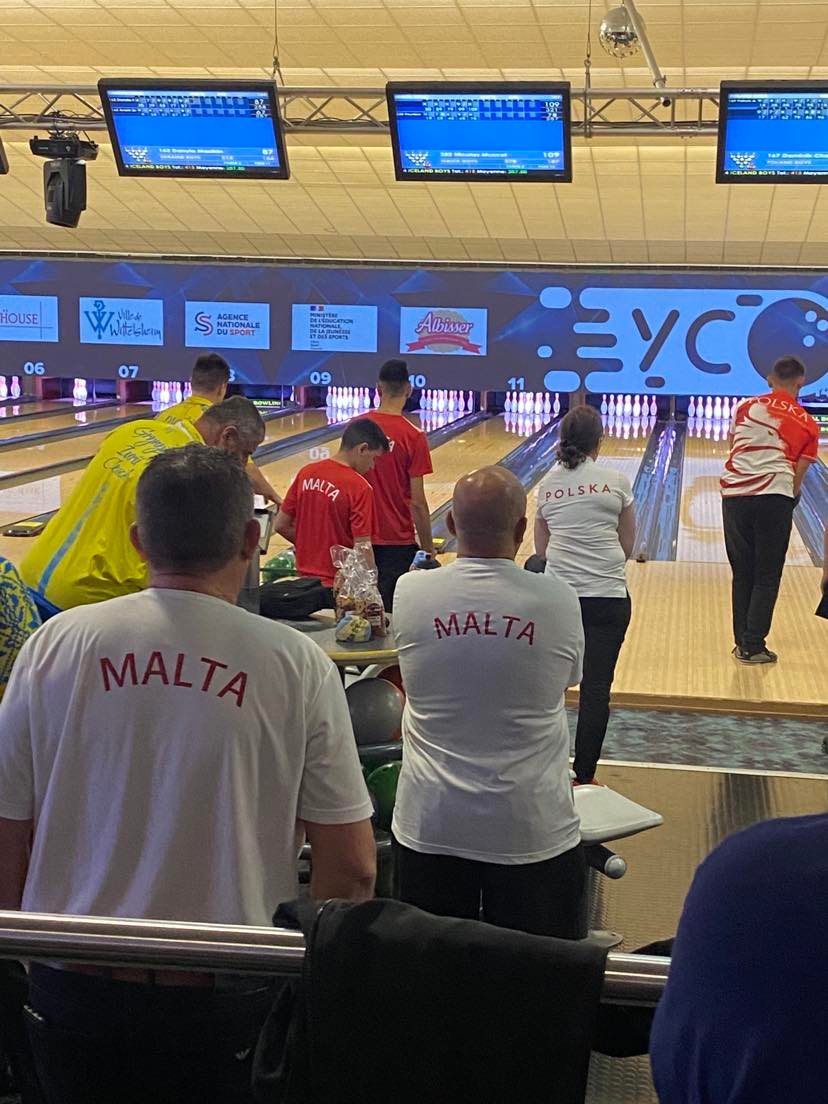 This of course was seen by the youth on the Island and a steady flow of young Malteasers learning the sport.

In the last few years Malta had a few coaches but all mostly doing their own thing and some coached by one and some by the others. Over time, some of these young bowlers began to show real promise and started to compete in Europe. Malta would visit the London International and other European events and success was starting to come, especially for Sara Xuereb, winning three EYC Medals . As that generation grew older, they made the first ever progression for Maltese bowlers to live and train in the USA.

The next generation now see that bowling can take you places you never thought you would go and can open doors to a much wider World. So fast forward to today and just two weeks ago, Malta won their first ever boys medals in the European Youth Championships in France. Like waiting for a bus, they did not just get one, they got three.

How did this happen? Island nation with one freefall bowl and one 4 lane string venue takes on the might of European bowling and comes away with medals. What was different about this championships for Malta was that two Coaches who had in the past not always seen eye to eye, were working together towards a common goal. It certainly worked and paid off so time for us to find out how they managed this feat. 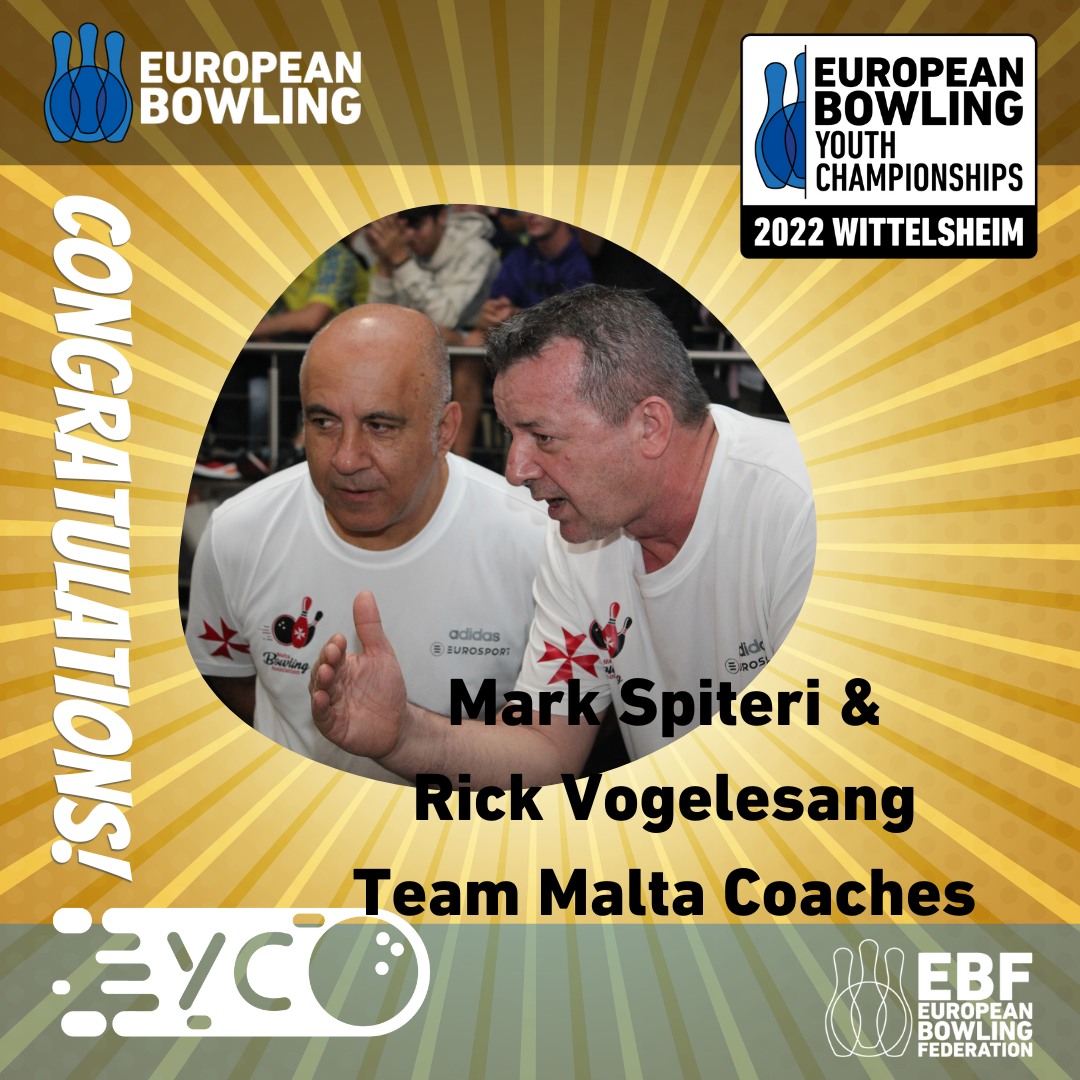 Mark “Boom” Spiteri and Rick Vogelesang are two very different people, both passionate about the sport with different methods and strengths. Mark is a good bowler in his own right and over the years competed against Europe’s best and earning the name boom as his trademark was shouting boom when he struck. Not always but you knew Mark was bowling🤣.

Rick a Dutchman, more a thinker and planner, trained at the Kegel centre and working with Athletes at the National Sport school , much traveled in the bowling industry and settled in Malta, coaching and proshop.

You have had a couple of weeks to reflect on the medals at EYC. How did it feel as coaches to see the hard work all come together in France?

Mark
From my end, elated. We already had such success for 2 consecutive years with Sara Xuereb, but this one, at least in my opinion, is on another level. Not easy to field a boys team in a harsh competition and bring this success. 3 medals, one as a team and 2 on individual level means a lot, moreover when one compares our financial assistance, practically we work as volunteers, with the big guns, we did miracles. Good to receive such result after a full year of sacrifices.

Rick
I think for the kids, the big turn around and motivation to do better came when the father of Sara and Edward Xuereb managed to get bowling included in our National Sport school here in Malta. Now with two Ex students Sara Xuereb and Matthew Magro fulfilling their dream with studying and bowling in the United states, it gives a boost to the youngsters that there is more than a trophy at the end.

As well, Mark and I have done the coaching education with the EBF so training wise Malta’s coaching platform is on the same level no matter with who the student wants to train with!

The last part is that we as a small Island and with not so many active members received compare to much larger federations the help and funding to go to these events. The MOC and Sportmalta here have an initiative to support our athletes young and old.

Trips to European and World events are most of the time completely covered by these 2 organizations and no fund raising is needed, only the coaches are not paid and I think the MBA could start to compensate the expenses of the coaches.

As you both say, funding is difficult, especially for a small island but these results continue to prove you have the talent there to succeed. What do you now work on with the young athletes for the next championships?

Rick
We did not start yet….We are still recovering!!😁

Mark
As Rick said, we haven’t started yet but at the same time, we both continue to train and teach our youngsters not just for EYC but for any other competition, being national league, tournaments, etc… In November they will have their own Nationals, Under 12, 16 and 23. Then the teams will be selected, the best 4 in each category will be chosen. They must reach certain level and for this we use benchmarks based on averages.

What has been the reaction back home to these medals and achievements?

Rick
In our bowling community good, They were surprised we did not kill each other🤣🤣🤣 In fact it was one of my best and most enjoyable trips (Not counting the ones with Sue😁). Media not so much except the times of Malta mentioned us.

Mark
Fully agree with Rick, Bowling community is delighted. Media, although bowling was covered in the news, its not their number 1 sport. They all dream about football, maybe one day in 1000 years time Malta will win the World cup🤣🤣🤣 Was good to see that Malta Olympic Committee recognised our success, even by publishing the results on their social media page, but unfortunately saw nothing from the government entity Sport Malta.

You mention there Rick, getting along😁It is true, as coaches you have both done things your own way and sometimes not always in agreement. Two great coaches though putting past differences aside and showing Europe what happens when many methods come together. How do each of you approach coaching the national team from your perspective?

Rick
We have at the end the same vision…the best for our athletes. In this EYC we made a plan together how we will approach and do the training. We both agreed that Mark will do the coaching inside the players area and I will support him and the team from behind the area. The “Team” was our key to success here!!

Mark
Although sometimes we do not agree on everything (quite normal), we both have one aim, to give to our athletes the best possible help. Rick already mentioned that we both did same EBF education programs, therefore we both work on same training programs. When nationals comes in, we both work for same targets in the name of our flag, hence such results.

We had meetings prior this event, even with MBA committee, especially our president, and we moved on. We both supported each other in the field and even outside, hence our result. As Rick mentioned, the team event was our key to success. Rick and I are now “la coppia piu bella del mondo” (the most beautiful couple in the world) as coaches😊

Malta is such a small island but is above average now in Europe when it comes to bowling, what is it about the Maltese mentality that make you all work so hard to achieve in the sport?

Mark
True we are coming from a very small island with limited resources but this does not keep us behind. We always try to do our best, to show what we are capable to do
Could be our Mediterranean spirit :):):)

Thank you to Mark and Rick for taking some time to speak about their recent escapades and make sure you keep an eye on Malta in upcoming championships.

*EYC Graphics thanks to EBF and Marios Nicolaides

Fun in the fun Malta Open gets underway at the Eden Superbowl 14-18th June 2017 €10,000 Mininum Guaranted prize Fund. The 26th Malta Open has seen many great champions over the years and continues to […]