Three English and one Irish made the PBA League Draft held virtually live of the web this week. Richard Teece was dafted by Amleto Monacelli for the new Las Vegas High Rollers team with Chris Sloan becoming the first Irishman in the league and drafted by Marshall Holman for the new Brew City Ballers.

England’s Dominic Barrett was retained by manager Jason Couch for the Philadelphia Hitmen and Stuart Williams retained by Andrew Cain for L.A. X. 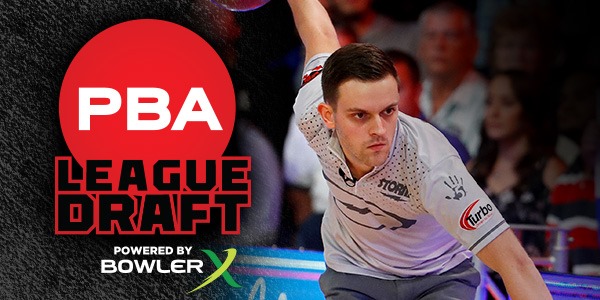 (May 18, 2020) – The expansion Las Vegas High Rollers selected two-time US Open champion Francois Lavoie with the first pick of the PBA League Draft powered by BowlerX Sunday, which was conducted virtually, live on FloBowling.

The Draft, originally scheduled for March 15 in Las Vegas at the PBA WSOB, was postponed due to COVID-19.

A highlight of the Draft was the complete 5-player construction of two expansion teams, the High Rollers and Brew City Ballers.

In all, 26 players were drafted to the 10 League teams, as eight of the original clubs were able to protect three players from their 2019 rosters. Fifty-two players were eligible to be drafted based on their points standing in PBA Tour competition over the past two years.

Of note, nine of the 26 players selected during Tuesday’s Draft are international PBA players, increasing the number to 13 of the 50 players on 2020 rosters.

All 10 PBA League team managers made their selections remotely to the FloBowling audience, with PBA League Commissioner Tom Clark presiding over the draft from his home in Wisconsin. Most players selected appeared via Zoom to comment on being chosen.

The PBA League Elias Cup tournament, originally scheduled for July at Bayside Bowl in Portland, ME, was postponed due to COVID-19 and will be rescheduled back in Maine, for later this year.

Below is order selected, followed by 2020 full rosters:

There’s a youth movement going on in today’s PBA Tour and it’s being underscored by the immediate impact young players are making in not just winning PBA Tour events, but by winning majors. You need […]