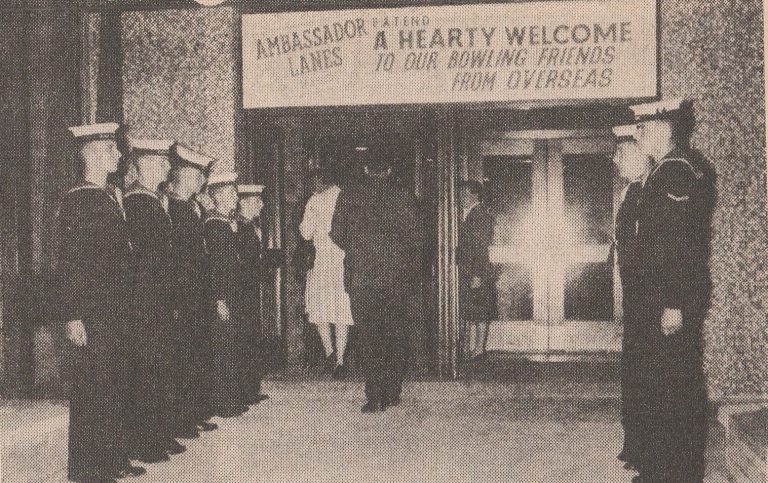 The Ambassador lanes opened on 20th January 1962 and was equipped with 24 AMF lanes and machines.

Ambassador Lanes Danestrete Stevenage was officially opened on 15th September 1962 by Dr. Charles Hill MP the former Minister of Housing and is believed to have been Ambassador Bowling’s second centre, it was equipped with 26 AMF lanes and machines on one level. Prior to the official opening. the centre had been functioning for several weeks, in order to encourage the local population to introduce themselves to tenpin bowling. As part of the opening the picture shows L S Michael, Ambassador Bowling General Manager with Fleet Street Sports Writers and show biz celebrities during a ‘challenge match’.

They also had a newsletter and we have managed to recover some thanks to Stuart Watson. If you have any of these issues please contact stuart@talktenpin.net

Back in the late Eighties, the BTBA national team coach was a man called John Williams. John wrote some fine coaching articles and it seems a good day to go back in time and see […]

Have you seen the UK Tenpin Hall of Fame?

Who has won what in the UK? Who have been the best ever bowlers? Who won the biggest prizes in the sport? In the early 2010’s, you could ask these questions but never find a […]

It’s time to start getting some old media online. Magazines, Flyers, booklets, the lot. We start with this one from the Silk Cut competition that ran in the 1990’s.   Simply hit the X button […]