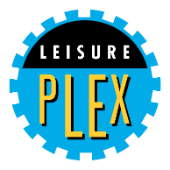 Close to 200 players from 19 countries took to the lanes this month in the EBT Irish Open Tenpin Bowling Championships 2018, in association with Storm Products.

The 30th anniversary edition of the Irish Open, which is the third stop on this year’s European Bowling Tour, will take place from the 14th to the 21st of January 2018 in Leisureplex Stillorgan. Some of the world’s best bowlers will travel to Dublin looking for their share of the €20,000 prize fund.

*Livestreaming will be available from Thursday afternoon

Top female early on was Northern Ireland’s Lauren Dugan with 1262 just ahead of Ireland’s Amanda Larkin with 1260.

Starfish from the Netherlands

Two more squads on Wednesday saw us find a new leader in former Malta Open winner Patrick “Starfish” Meka from the Netherlands who hit 1443 to jump ahead of Ireland’s Alan Bride who back on the lanes again added another four pins to his total for 1430. Into third was another Dutchman Elco Gorter with 1409 with Ireland’s Stephen O’Connor in fourth with 1405. Our first 300 came from Irishman Aiden Byrne.

Thursday started with a new leader as Belgium’s Steve Gastmans with 1469 followed by Scotland’s James Guthrie with 1394 and Dutchman Elco Gorter in third with 1389.

The second squad of the day and we started to see some fireworks as first Finland’s Teemu Putkisto fired the second 300 of the anniversary year, then a game later Northern Ireland’s Paul McCauley also hit a perfecto. The Fin managed to keep the pace for 1417 at the end but McCauley dropped away to 5th.

Next up we saw a masterclass from the 2013 Irish Open Winner Barry Foley as he fired a commanding 1509 which included a first game of 186. Foley on fire also added the fourth 300 of the championships in game five. Coming close with 299 was Ireland’s Jason Byrnes, stopped by a pesky seven pin.

The final squad of the day saw the PBA grab the top two spots as Anthony SImonsen hit 1426 after starting with 269 and 290. Richard Teece was second on the squad with 1386 with Matty Clayton third with 1353.

A new slimline Rob Thurlby was top dog in the first squad of Friday with a solid 1478 including a 279 to jump into the top three. Andy Jones placed second with 1436 as Dutch livestreamer Simon Schepers took time off to roll a fine 1386 although a few pocket 7-10’s meant he could have had a lot more.

On to the second squad of the day and Dutchman Ramon Hilferink was the top guy with 1436 and just ahead of Ireland’s Stephen Joyce with 1435 and Alan McDonnell in third with 1425.

As squad later it was that man Barry Foley again with a big 1472, not quite the 1509 from a day before but still a solid performance and he looks the player to beat this year.

The final squad of the day had us with yet another 300 and this time from Frenchman Jean Pierre Paugnat who looked like making back to back 300s at one stage. Iceland’sEinar Mar Bjornsson took the squad win with 1420 as England’s Jason Agate placed second with 1392.

The next squad saw another dutch squad win and second squad win for Ramon Hilferink who hit an improved 1527 to place second overall.

The final squad of qualifying and finally it was joy for a few players who had struggled to make the final. Taking the squad win was Italian Nicola Pongolini with a solid 1497 and some way ahead of a second placed Anthony Simonsen with 1407. Chris Sloan from Ireland grabbed his place in the finals at last with 1391.

The desperado saw an exciting one game roll off and the three players making it through were Pete Rogers with 279, Nicole Sanders with 244 and James Claxton with 243.

Over two parts we found our top 28 from 53 players. Leading the way was the two handed American star Anthony Simonsen with games of 236,279 and 253 for 768 as fellow PBA star Richard Teece placed second with 739 and Iceland’s Einar mar Bjornsson with 722.

Only 12 places were up fror grabs in the final step 2 and making it through were in first place Finland’s Teemu Putkisto with an amazing 791 followed by Dutchman Nico Thienpondt in second with 745 and Ireland’s Stephen Joyce in third with 737 including the events 9th 300 game. Other through included Kaaron Salomaa, Anthony Simonsen, Andy Jones, Nicole Sanders, Lee Cocker, Jason Agate, Rob Thurlby, Edwin van Arle and Tom Byrne the cut with 675. Out went Aiden Byrne, Richard Teece, Steven Gill and Keira Reay among others.

The final turned out to be one of the best for some time as Foley and Simonsen traded talk on the lanes trying to get under each others skins. Simonsen had the edge for most of the match as he raced to a 52 pin lead after the first game but Foley came back at him. As the Irishman closed the gap the American tried to hold firm and in the last couple of frames pulled away again to register a 460-428 win and became only the second American after Brian Voss to win the Irish Open title.

In the senior final, Tom Byrne from Ireland looked to increase his winnings against England’s Selwyn Morgan . The first game went to the Irishman 201-193 and the lead was stretched as Tom recorded a 256-189 and a 449-390 win to claim his second senior Irish title after winning in 2016. Finally Nicole Sanders became the highest placed female and claimed the 2018 womens Irish Open title. 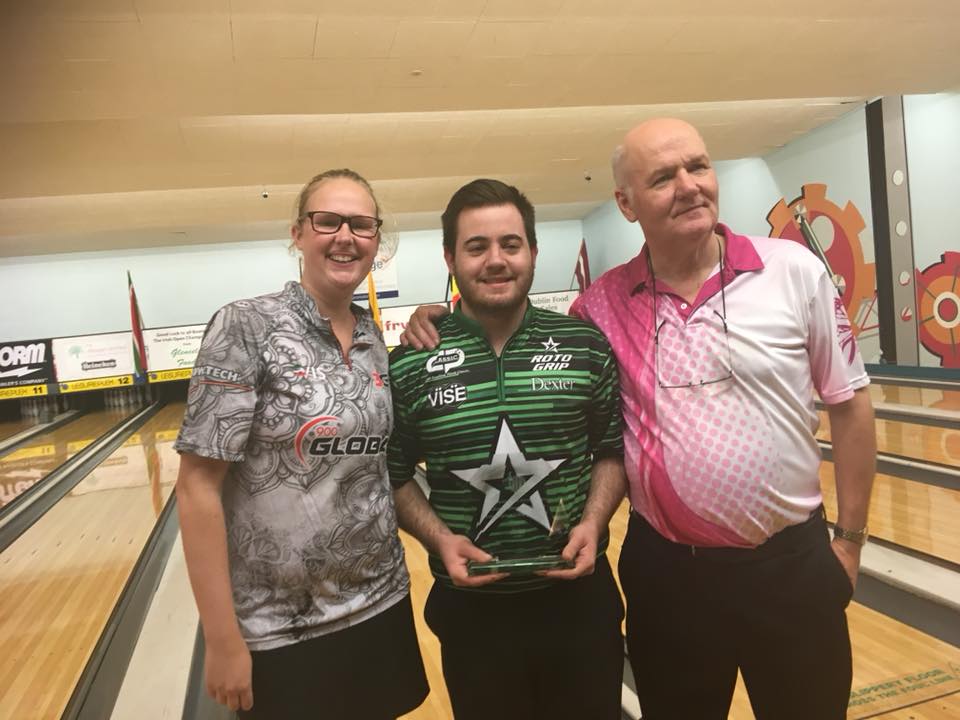 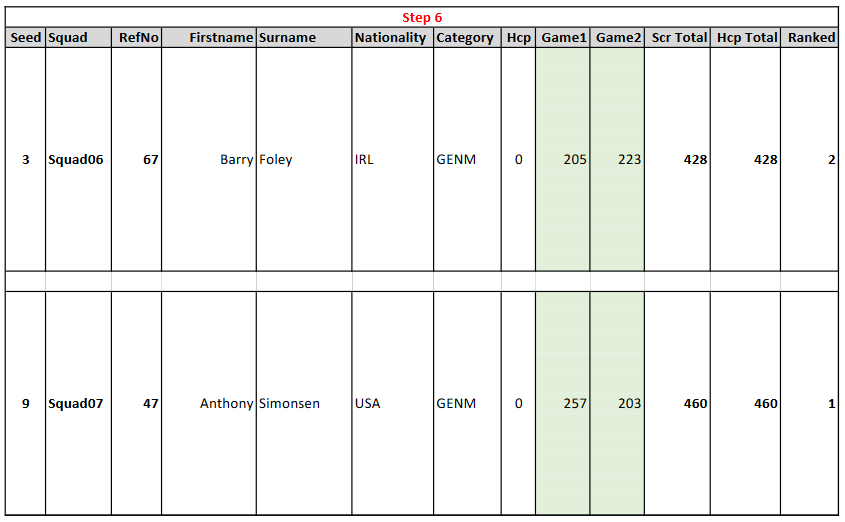 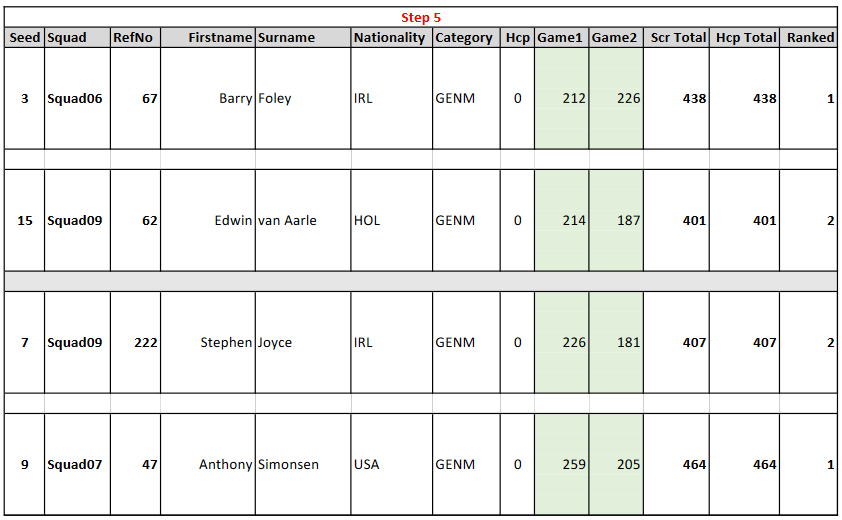 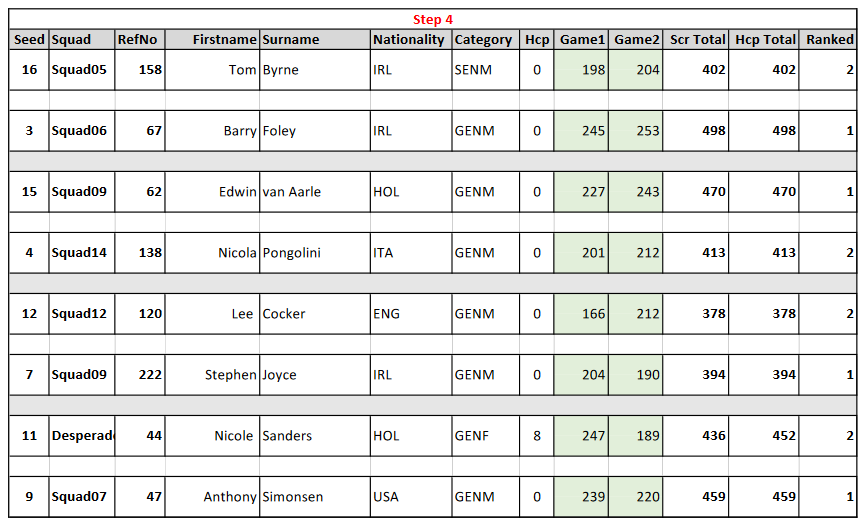 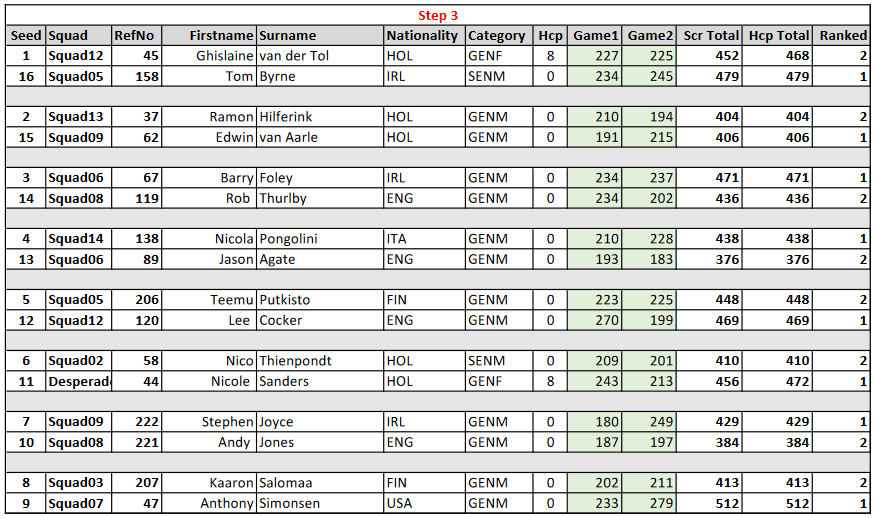 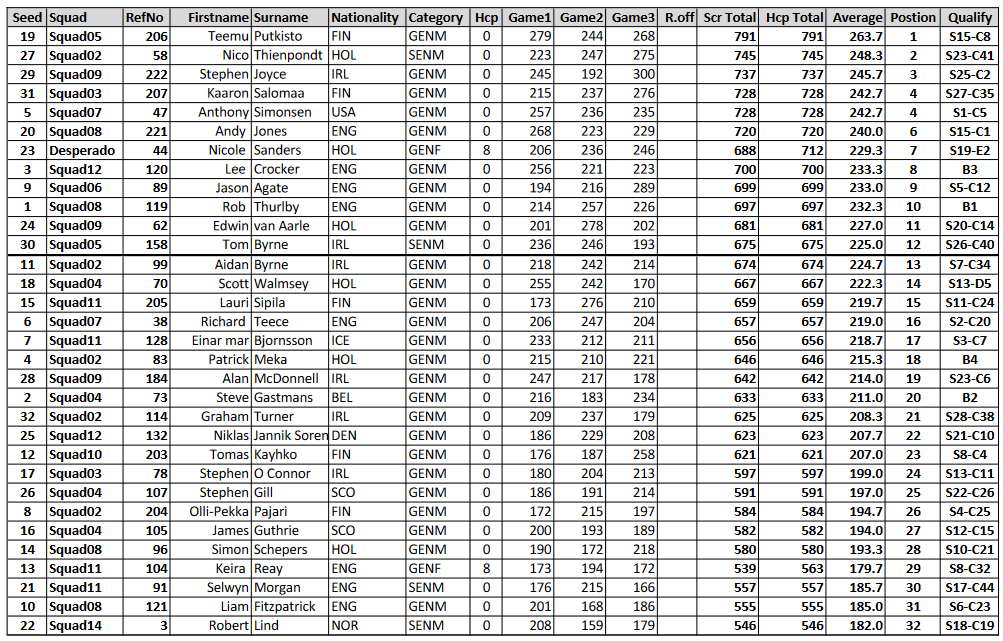 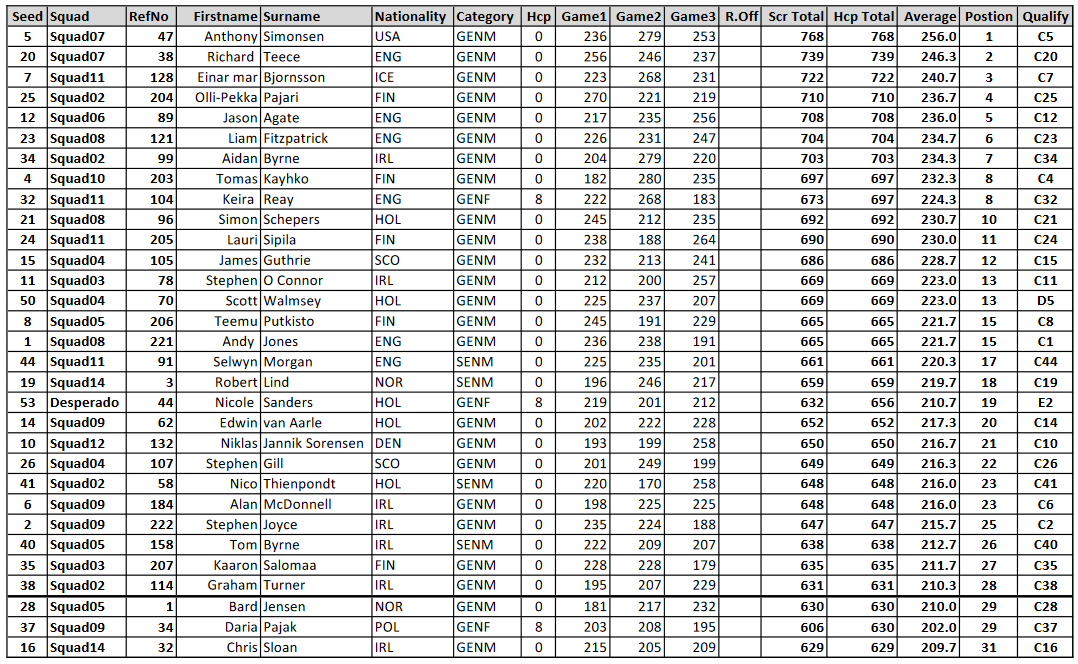 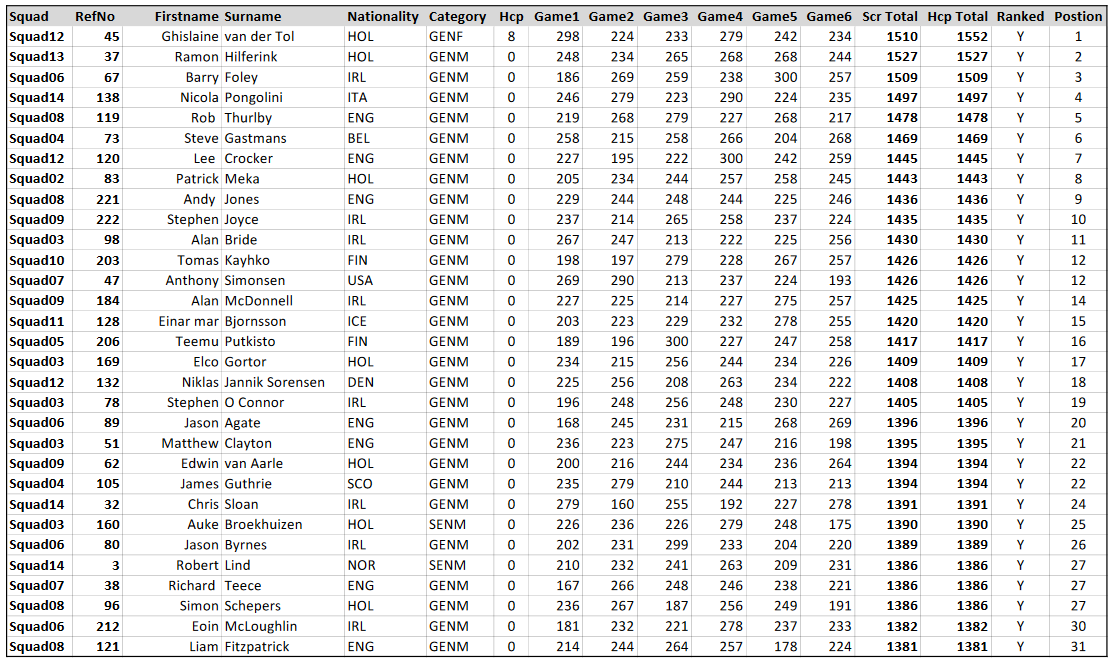 It’s the Men’s World Championships in Hong Kong. Irish two hander Chris Sloan has made it through a grueling set of disciplines of Singles, Doubles, Trio’s and Team. He’s finished in 6th place in the […]

The Bowltech UK Website has been updated with all the latest ball releases from Storm, Roto Grip, Ebonite, Hammer, Track, Columbia 300, Motiv and 900 Global. Many of these balls are available in the UK […]