January sees the 32nd edition of a much loved and popular European tournament. 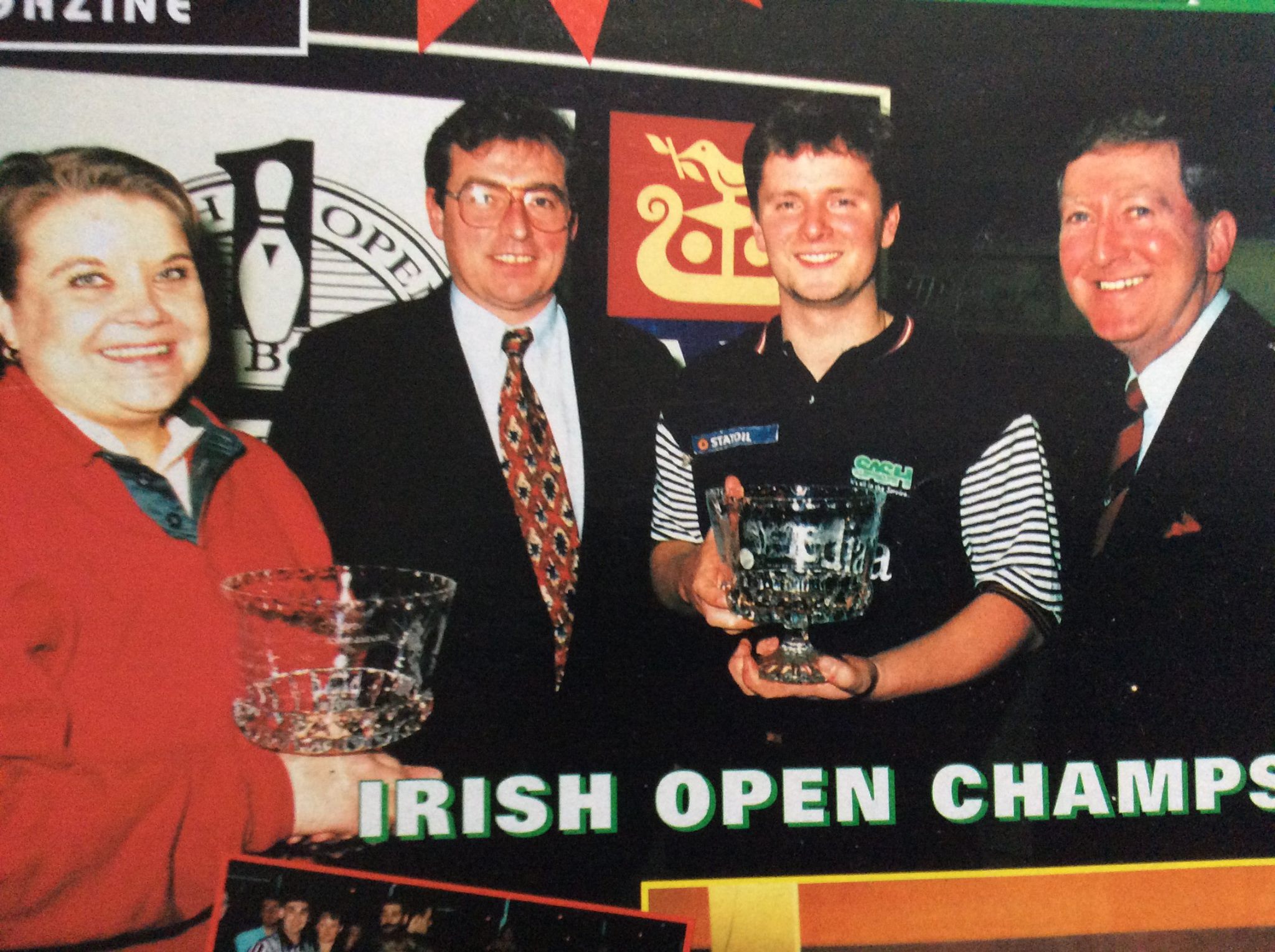 Over the thirty two years, the winners list has become a who’s who of top bowling talent. It all started in 1989 with England’s Chris Buck became the first champion. The centre was still undergoing construction work at the time, taking it from 24 to 36 lanes.

The idea for an Irish open was thought to have come the year before when the Northern Scratch Tour from England held a tournament in Stillorgan which proved a big success.David Grainger who ran the tour at the time explains the story.

“The Irish Open was born out of a conversation we had with Bernie Gibbons at the British Open in 1987. We had been providing the computerised scoring for Jock Caie for a number of years and after the tournament we were all talking and said to Bernie you should have one of these (Open) and offered to come over to run it. The idea took off and we agreed a date in January, why I ask myself, and the tournament was set up. We took our computers and a number of the Northern Scratch Tour Bowlers over and were joined by members of the Charrington House team organised by John High. The Charrington team had an annual challenge match with Stillorgan so knew them well. In total with the Irish contingent we managed 72 bowlers, I know because I finished 72nd, and this was the Stillorgan Open and was televised by Irish TV. As they say the rest is History as the event has gone from strength to strength. I will be in Ireland this weekend joining in the 30th year celebrations, Good luck to all bowlers, I know you will have a great time.”

UK Tenpin Hall of Famer Chris Buck won that Irish stop in 1988 so was fitting he became the first Irish Open winner just a year later. The event itself attracted 142 competitors from six countries including 25 ladies and was sponsored by Allied Banks taking the prize fund to £5000.

International player making the trip included Norway’s Arne Stoem and a man who still comes to the event today, Erik Garder. Sweden’s Goran Bergendorff from Sweden and the USA’s Jim Williams joined bowlers from Holland, England, Scotland and the home nation Ireland. Buck was to meet Garder in the final in a tight match that saw the Englishman pull away towards to end to record the 198-158 win in history.

A year later we had our first female champion as England’s Kimberly Coote (Now Oakley) won with Steve Gomersall taking the men’s title.

From the then until now starts the who’s who of European talent, PBA titlists Dom Barrett and Paul Moor from England share the spoils for most wins with three each and in the women Pauline Buck (ENG), Lena Sulkanen (Den), Kirsten Penny (Eng), Kerena Dykes (Ire) and Amanda Larkin (Ire) have all won twice with Amanda Larkin winning the last two and look for the first hat-trick of wins. American PBA Legend Brian Voss is a two time winner as is European legend Tore Torgersen who won in 2017 after first winning back in 1996. In all those years though, only one Irishman has won the title as Barry Foley won in 2013. That is not to mean they have not been close, many great Irish bowlers have placed second over the years.

All four of the above won the event in various years. All three English ladies now in the UK Tenpin Hall of Fame

Here is a look back at some of the past winners

UPCOMING LIVESTREAMING – Back in Ireland and better than ever

In partnership with Dutch Bowling TV, Irish Open and with special thanks to Michael Roe we will be live from the Irish Open from Thursday afternoon. All Squads will be LIVE on Facebook and uploaded […]

European Bowling Tours in the future

Following Press release 2017-08, announcing yet another reduction of the European Bowling Tour to 12 tournaments; it is essential for the ETBF Presidium to send the following message to the bowling community in Europe. It […]

The organizer of the Hammer Bronzen Schietspoel Tournament 2018 has decided to change the conduction period of the tournament from 4-11 February 2018 to 15-22 April 2018. The reason is that the construction of the […]