Kulick, a six-time major champion and the event’s top seed, defeated rookie of the year candidate Verity Crawley of England, 224-218, in the title match. The stepladder finals aired nationally on CBS Sports Network on Tuesday.

The moment was almost more of the same for Kulick as she traded strings of strikes with Crawley late in the championship match, and had a chance to shut out Crawley in the final frame. But Kulick spared in the 10th, followed with a strike on the final offering, to leave Crawley with the opportunity to win her first career title.

Needing a double in the 10th frame to secure a victory, Crawley left a 3-6-10 on the first shot to give Kulick her first title in 11 championship-round appearances of PWBA events since 2015.

Amidst personal and physical trials during the last two seasons, Kulick still was able to put herself in position for a title but had been unable to find the winner’s circle. She battled an ankle injury during the second half of last season, and endured the death of her mother, too.

Words simply couldn’t describe the feeling for Kulick after climbing a mountain to what was such an elusive victory.

“I’m speechless,” Kulick said. “Words can’t describe it because she (Crawley) had a chance to shut me out and I caught some really good breaks. It’s not a hump I got over, it was a mountain. I give myself credit for making so many shows and being one of the consistent players out here on tour. Everyone looks at wins, and even though I didn’t win, I still considered myself a winner because I know what it takes to win.

Crawley, the No. 2 seed, advanced to the title match when she struck seven consecutive times en route to defeating No. 3 seed and reigning back-to-back PWBA Player of the Year Liz Johnson of Deerfield, Illinois, 241-211. Johnson was looking for consecutive titles after winning the PWBA Storm Sacramento Open last week.

The stepladder finals were held May 23 at the Raising Cane’s River Center in Baton Rouge, Louisiana, in conjunction with the USBC Queens and the finals of the QubicaAMF PWBA Sonoma County Open and PWBA Storm Sacramento Open.

For more information on the PWBA, visit PWBA.com.

About the PWBA
The Professional Women’s Bowling Association (PWBA) originally was formed in 1960. The PWBA Tour has events throughout the country, offering high-level competition and top prize money for women bowlers. The PWBA is supported by the Bowling Proprietors’ Association of America (BPAA) and the United States Bowling Congress (USBC)

FOUNTAIN VALLEY, Calif. – Like any athlete, each time Kelly Kulick of Union, New Jersey, competes, there is the hope that everything will align physically and mentally, and a clear-minded focus will result in a successful outing.

The reality is that those days are rare, so when the lane condition at the 2017 Professional Women’s Bowling Association Fountain Valley Open allowed Kulick to play to her physical strengths, she was able to capitalize on the opportunity and offset the fact that she wasn’t feeling as focused as she was at this point in past PWBA Tour seasons.

This week’s 38-foot oil pattern at Fountain Bowl allowed Kulick to open up the lane and attack it in a left-to-right fashion, and being in her wheelhouse helped her get more comfortable with each round on her way to the top seed for the televised portion of the event.

She will be joined on the show by No. 2 seed Verity Crawley of England, No. 3 Liz Johnson of Cheektowaga, New York, and No. 4 Cherie Tan of Singapore.

Kulick and Crawley earned their spots on the show by leading their respective match-play groups Saturday at Fountain Bowl, with total pinfall, bonus pins included, determining the top seed. Johnson and Tan each rolled through their group stepladders to advance, with seeding based on their averages for the event.

The TV finals of the PWBA Fountain Valley Open will be taped May 23 during the United States Bowling Congress Queens and is scheduled to air June 20 on CBS Sports Network.

“Today, I just tried not to over-analyze,” Kulick said. “I took the bad shots for what they were and took advantage of the good shots and breaks. I was focused on rhythm and footwork, and it helped that the pattern allowed me to play my A-game.”

Kulick started Saturday’s Cashers’ Round at Fountain Bowl in fifth place but averaged 236 over six games to enter round-robin match play as the top seed. She then turned in a 4-2 match-play record, while separating herself from the rest of the field.

As the top seed, Kulick needs just one win to claim her first title since the return of the PWBA Tour in 2015, despite a combined 10 championship-round appearances during the 2015 and 2016 seasons.

Last year, she fought through an ankle injury. This year, it’s a recent grip change, while the stresses and responsibilities of life outside of bowling have left her less than prepared for the challenges of the PWBA Tour, though it’s something she’s working through with help from friends and family.

“I want to win again, and I believe I belong in the winner’s circle,” said Kulick, a six-time major champion, including the 2003 U.S. Women’s Open for her lone PWBA Tour title. “Right now, I’m trying to find the right balance. There have been some challenges. Things haven’t gone so well on TV. It definitely takes skill to get there, but, sometimes, you need a little luck to win. I feel like once I can get that first win under my belt, it will lead to the opportunity for more wins.”

Crawley, a recent graduate of Webber International, will make the first TV appearance of her young PWBA career. Her job as a paralegal has limited her PWBA participation, but she’s planning to bowl the remaining events in 2017.

Johnson, who was sick most of the weekend in Fountain Valley, qualified for her second consecutive TV show with a 258-226 win over Clara Guerrero of Pflugerville, Texas, in the Group B stepladder final.

Both players struck in five of the first six frames, but nine-counts in frames seven through 10 proved to be the undoing for Guerrero, who paced the field though the first two rounds of qualifying.

Johnson advanced to the Group B final with a 211-205 win against Singapore’s Shayna Ng, converting a 10 pin in her final frame to secure the victory.

Tan, the only left-hander to advance to the Cashers’ Round, defeated her younger sister, Daphne, 210-199, to earn her first TV berth of the 2017 season. Tan claimed her first PWBA Tour title at the 2016 PWBA Storm Sacramento Open.

Cherie Tan’s road to the Group A final went through Guerrero’s Team Colombia teammate, Maria Jose Rodriguez, who now resides in Austin, Texas. Tan stayed clean on the way to a 196-150 win over Rodriguez, who split four times in the match.

The 2017 PWBA Fountain Valley Open, the third of 14 events on the 2017 PWBA Tour schedule, featured 83 competitors from 11 countries and marked the PWBA’s first visit to Fountain Bowl since the venue hosted the U.S. Women’s Open in 1991 and 1992.

Competition this week began Friday with two six-game qualifying blocks to determine the 32 players for Saturday’s Cashers’ Round.

An additional six-game block Saturday morning narrowed the field from the 32 cashers to the top 12 players for round-robin match play.

The 2017 PWBA Tour season continues next week with the first major of the season, the USBC Queens at the Raising Cane’s River Center in Baton Rouge, Louisiana.

CBS Sports Network will televise the stepladder finals of 13 of the 14 PWBA Tour events starting May 23 with the USBC Queens.

Go to PWBA.com for more information about the PWBA Tour. Qualifying and match-play rounds of PWBA Tour events are broadcast on Xtra Frame, the exclusive online bowling channel for the Professional Bowlers Association.

About the PWBA
The Professional Women’s Bowling Association (PWBA) originally was formed in 1960. The PWBA Tour has events throughout the country, offering high-level competition and top prize money for women bowlers. The PWBA is supported by the Bowling Proprietors’ Association of America (BPAA) and the United States Bowling Congress (USBC) 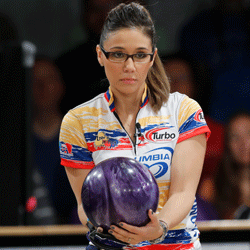 Guerrero and the rest of the top 32 competitors will be back on the lanes at Fountain Bowl on Saturday at 11:30 a.m., and the cashers’ round will be broadcast live on Xtra Frame.

View the complete standings and follow the action at PWBA.com/Live. 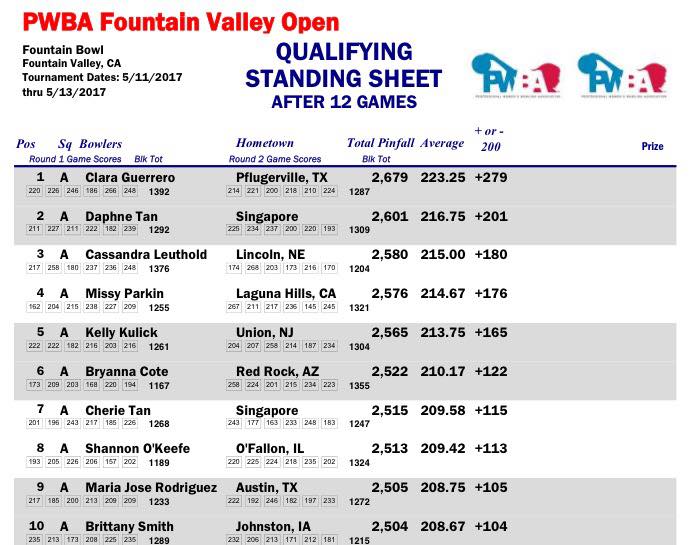 ROHNERT PARK, Calif. – Brandi Branka of Fairview Heights, Illinois, made the first Professional Women’s Bowling Association (PWBA) Tour event of 2017 a memorable one by capturing the No. 2 seed for the championship round […]

ARLINGTON, Texas – Julia Bond of Aurora, Illinois, has enjoyed success at every level of her bowling career, and she raised the bar again Tuesday as she claimed her first Professional Women’s Bowling Association Tour […]

So close yet again for PWBA Rookie sensation Verity Crawley

We try to get into the mind of a future champion Well, it happened again, for the second time this season England’s PWBA rookie sensation Verity Crawley qualified for the PWBA Greater Detroit Open TV […]