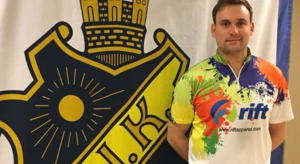 Scoring in this year’s AIK has been massive. To be fair though, there are some very good players among the amazing 369 entries.

Into the final stages and World star Sandra Andersson smashed 1499 to take step 1 with perfect games from James Gruffman, Kamron Doyle and Teemu Putkisto. Step 2 and Kim Bolleby lead the way with 1491 with Jenny Wegner in second with 1450 and American Kamron Doyle in third with 1450.

Step 3 saw Jesper Svensson take the lead with 2499 and only just keeping the lead in step 4 as Kim Bolleby tied in first.

Semi final time and Kim Bolleby took out William Svensson 213-175 but could not beat the other Svensson as Jesper won out in the final 249-226.

Team Europe’s record-breaking 2016 Weber Cup squad will be back in its entirety for this year’s transatlantic tenpin tussle, which returns to its familiar Barnsley Metrodome home from September 8-10, with tickets on sale now. […]

Bill O’Neill and Jesper Svensson will join Team USA and Team Europe respectively for the 2020 Weber Cup, which will take place at Morningside Arena, Leicester this October 23-25. The newly expanded five-player teams for […]