In 1966, ATV decided to screen a pilot for a possible weekly tenpin bowling programme. At that time, I was bowling for one of the country’s top men’s teams, the Greyhounds. We were invited to take part in a match at Wembley Bowl against a top ladies’ team. It was to take place midweek in the afternoon and was to be shown live.

On the day, my team mates were Peter Loney, Joe Kilian, Joe Michael and Brian Michael. We arrived at Wembley and prepared to play. Before we started, we were advised that there were cameras behind the pins with perspex screens protecting them. We were told not to laugh if pins bounced back onto the pindeck after hitting the screens, something which rarely happens when there are no such screens. We were also requested not to talk for fear of it being picked up by the microphones.

The commentator was Kent Walton, well known for commentating on the TV wrestling programmes, and more used to describing the antics in the ring of such people as Mick McManus and Billy Two Rivers than the bowling of Brian Michael and Joe Kilian.

We were asked to start bowling and that televising would start at some point during the 3rd and last game. We eventually won the match..

Immediately after the game, we were invited to put forward a player to be interviewed by Kent Walton. Peter Loney was volunteered. Not long into the interview, Walton said to Peter: ‘I know there is a very interesting story surrounding the name of your team’. Peter later said he nearly froze as he knew of no interesting story, and furthermore did not know why the team had its name. With great presence of mind, he told Walton that the team owned a greyhound and took a great interest in racing.

Home recording of TV programmes did not exist at that time, so many years later, I wrote to ATV to ask if they had a video recording. I received a letter back from Billy Wright CBE, formerly captain of the England football team, now Head of Sport for ATV, saying that the tapes had been wiped, presumably to make room for more recordings. 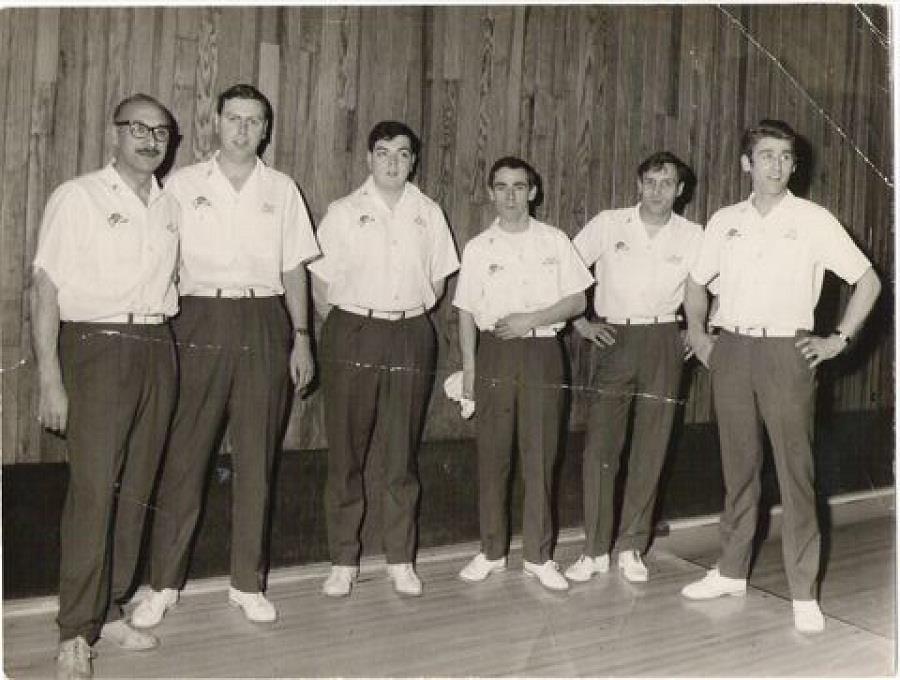