The European Youth Championships 2018 took place at Lovvang Bowling Centre, Denmark between the 23rd March and 2nd April 2018.  A total of 66 girls and 90 boys from 28 countries competed in the championships.

In the semi-finals, Svensson narrowly defeated Skryten in a nail-biter that ended 239-237, as Muzafirovic defeated Dubois br a slightly more comfortable 23 pins, 199-176.  The final was again very close, with just 7 pins to separate the winner Svensson on 254 from second-placed Muzafirovic with 247. 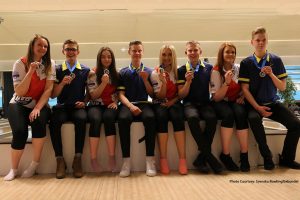 In the final, Sweden went even better, bowling 950 past Norway’s very respectable 857 to take the gold, leaving Norway to collect silver, and Denmark and the Netherlands sharing bronze.

Girls: After qualifying in fourth, the Czech Republic’s Vojtechova, Krummerova and Petakova were supported superbly by Uhlirova – who bowled a 238 game – to defeat Denmark’s Dam, Christiansen, Dicay and Guldbak  by 53 pins 768-715, and set up a finals match with England’s Thompson, Williams, Giddens and Allen who had defeated Sweden’s Ekholm, Lejman, Friman and Engberg 844-806.

In the final the tension was mounting on these young shoulders as there was little between England and the Czech’s, but England would be the strongest with a matched team performance bowling 736-716 for gold by 20 pins over the Czech Republic who took silver, and Denmark and Sweden share bronze. 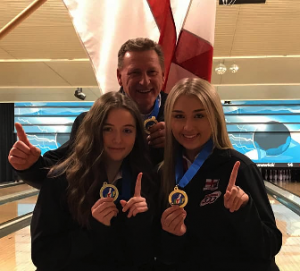 Boys: Sweden’s Lukas Sevelin and Oskar Wirefeldt defeated Germany’s Felix Huebner and Tim Lindacher 433-395 whilst Finland’s Pyry Puharinen and Jesse Ahokas defeated Belgium’s Clement Bernard and Darren Pellegroms 421-363 to meet in the finals.  In the final, a 239 from Puharinen and 235 from Ahokas would prove too much for the Swede’s, and Finland took gold 474-458 from Sweden who took silver, and leaving Germany and Belgium to share bronze.

Girls: England’s Isabel Allen and Sophie Thompson defeated Sweden’s Judith Friman 501-442 (including a run of 8 strikes from Allen) whilst the Netherland’s Beaudine Kriele and Denise Blankenzee defeated hosts Denmark’s Megan Dicay and Mika Gulbak 368-323 to meet in the finals.  In a memorable final that went to the 10th frame, Thompson converted a critical spare on ball 11 to enable England to take gold by five pins over Kriele and Blankenzee 439-434.  Netherland took silver and Sweden and Denmark shared bronze.