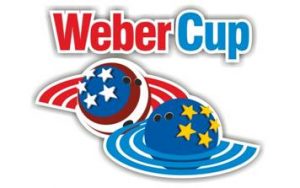 As far as UK bowling fans are concerned, the Weber Cup is the best event on the tenpin calender. A chance to see some of the World’s best bowlers in a Trans-Atlantic battle like Golf’s Ryder Cup. The event is held in purpose built arena’s around England and returned to Barnsley in 2017.

Over 18 years we have Europe winning ten times and USA winning eight times. Europe over the last five years have been untouchable. 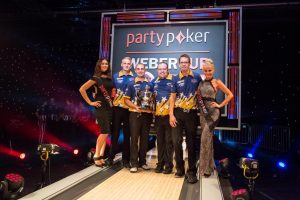 Well with Barnsley Metrodome unavailable in 2016, we saw Manchester host a fantastic show in a spaceous venue just a short walk to the massive Trafford shopping centre. A summer edition in August did not keep the crowds away with many in the queue to enter two hours before the start. Back in Barnsley in 2017 in October and considered the home of the Weber Cup. The event could be anytime between June and October.

On the lanes there was no change in the European side last year but the USA side saw the Sean Rash come in as captain and joined by another new face in EJ Tacket who joined Marshall Kent and colourful showman Kyle Troup. 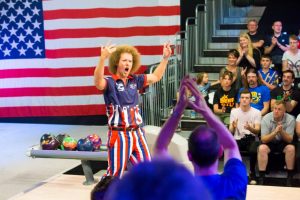 Rash could not stop the USA rot despite some flashes of promise from the USA side who entertained and gave it a go, the additional media they did with Matchroom and airing during the year was also fantastic.

Europe strong yet again, Captain Dom Barrett with Lucky Larsen (Martin) and Beef Stu Williams and now with Jesper play as a team on and off the lanes, they are a close family and hard to break down.

The USA team over the last few years have struggled to keep up with what will go down in history as probably the best European team ever.

Putting the best bowlers in the World in a team is not as easy as you might think. A dynamic needs to be there between people who are trying to beat each other week in week out back home. It helps when some of them room together or are friends but getting a USA team that close is not easy. It is easier when it is Team USA though, Being picked to play for your country for a TV event in the UK cannot really match up to representing your country in the World Championships and earning your spot in the team in trials.

So what does the USA do this year, Is it an easy right let’s have the same team as last year as they looked to gel despite the end result and give them a return matchup?

DO USA BRING BACK THE BIG GUNS?

Chris Barnes would love to be back after his and Tommy Jones World Championships doubles Gold medal and maybe join two of the four above? Anthony Simonsen must be close, or what about Thomas Smallwood? Norm Duke for a legend appearance?, or even Pete Weber back? Not short of options whatever way you look at it. The Americans may still need a left hander to counter Jesper so Is there room for Rhino Page, Jakob Buttuff or another?

Sorry then for the when, where and who might play, we got no answers for you but we are excited about finding out soon as we are sure a lot of you are too.

Kyle Troup has warned Team Europe that, after a four-year trophy drought, USA will not be leaving Barnsley without the Weber Cup. The North Carolina bowler made his tournament debut last year and his exuberant […]

BARNES BACK TO LEAD TEAM USA

Highest American on PBA Points List to earn automatic qualification to the team Chris Barnes will return to captain Team USA at the 2019 Weber Cup, as the PBA Tour Points List will be used […]