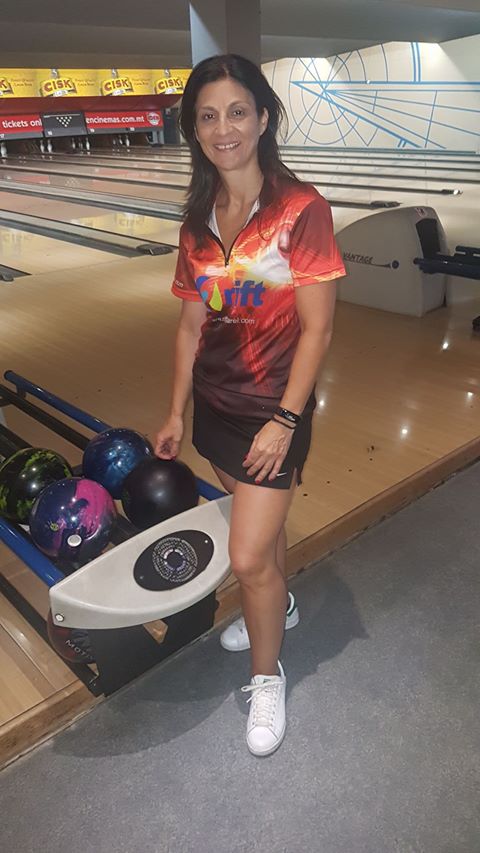 Malta’s Sue Abela met defending champion Aidas Daniunas of Lithuania. Abela known around Europe as the Queen of the Mediterranean won the first game against a strong left handed Daniunas 213-192 and took the second by almost the same margin 218-193 to claim the title for the third time and first in combined male and female event.

Sue Abela took out Frenchman Julien Sermand with games of 218 and 278 to win 512-428 and Rob Thurlby lost to Aidas Daniunus with the Lithuanian hitting 528 to the Englishman’s 452.

8 becomes 4 in the quarter finals and the full results can be viewed here. Sue Abela proceeds to play Julien Sermand and defending champion, Aidas Daniunus plays Rob Thurlby in the next round.

Matchplay is always exciting and the round of 16 was no exception. The full results can be viewed here, but it was heartbreakingly close for Vicki Harman who lost by 2 pins to Barry Foley, Gary Newton who lost by 3 to Rob Thurlby, and Mark Spiteri who gave it away in the 10th frame to Justin Caruana Scicluna.

The top twelve bowlers took to the lanes for their next four games, joined by those seeded 7-12 from qualifying. Scores were back to scratch, with the top ten bowlers going through to the matchplay rounds. Adam Michaels was the top scorer this block with 966, followed by Malta’s Mark Spiteri with 951 and Justin Caruana Sciclu with 950. Rankin Luke Camilleri took the final spot with 859.

The cut came at 853 for Amanda Larkin, with Damir Brazezac missing out by just one pin. The twelve bowlerhes are now joined by those seeded 7-12 for a further four games.

The results are in, with the top 28 bowlers from qualifying making the cut, which fell at 2576 for Maltese National Champion, Mauro Anastasi. They are joined by four bowlers from the turbo qualifying, Bart van Kerckhoven (290), Gary Newton (279), Neil Sullivan (277) and Sascha Wedel (272). The four bowlers to proceed from desperado were Marco Landman (279), Glenn Verlinden (248), Kevin Brockman (243) and Melissa Swift (242). It was bad luck for Tiziana Carannante who missed the top 28 by just 1 pin and the desperado by just 2.

The top 6 bowlers have a bye to round 3, with Rob Thurlby taking the sixth spot, and places 7-12 joining in with round 2. Marc Jorg was the cut to 12. Sue Abela is the tournament leader. The top 12 bowlers from round 1 will proceed to round 2. Scores are back to scratch.

Happening between the 8th and 12th June 2022 at the Eden SuperBowl in St. Julians, Malta The Malta Open is back again and over 80 bowlers from multiple nations set to compete for one of […]

The Malta Open is back.  Happening between 13th June and 17th June 2018 at the Eden SuperBowl in St. Julians, Malta Ask around and some bowler you know has played in Malta and will confirm […]

With one day to go before the 26th Malta Open Championship kicks off, I’ve had the opportunity to explore the island and see a bit of what Malta has to offer. Newcomers to the tournament […]