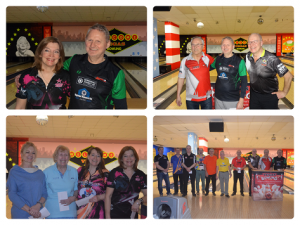 The first stop on the 2017 ISBT tour returned to Vegas Bowling in Osnabrück in Germany for the 12th running of Arthur’s Senior Open, organised by Arthur Dähn. This year the tournament took place over the same weekend as the 2016 ISBT Masters tournament, and as a result the entry was a little higher than normal with a total of 91 men and 23 women. The format for the tournament was a single 6 games qualifying block, with unlimited re-entries allowed.

Age bonus started at age 51 (1 pin per game), then increased by one pin for every additional year of age with no limit. There were additional opportunities to qualify for the finals through Early Bird and Turbo rankings, and for the men a scratch ranking. As with all ISBT events, there was a separate division for ladies. The tournament was played on the Kegel Broadway pattern, which is from the Kegel Challenge library.

The tournament started on Thursday, with two squads bowled. The scores showed that the pattern was indeed challenging, however Paul Cosgrove (Netherlands) hit a fine 1427 with age bonus, well ahead of Jürgen Preuss (Germany) on 1284. Top lady over the day was Petra Viehweg (Germany) with 1139.

Friday saw the arrival on many of the overseas players, and Christer Danielsson (Sweden) immediately showed how to score on the pattern with blocks of 1358 and 1476. Hermann Wimmer (Germany) also had no problems with a block of 1397, just one pin behind Ron Oldfield (England). In the women’s section, no-one was managing to break par, Bozena Pajak came closest with 1180, just ahead of a fine 1174 for Ruth Stander (England).

There were four more squads on Saturday, and high scores remained few and far between. Alan Jenkins (England) was highest over the day with 1342, just ahead of Giorgio Desimio (Belgium) and Alan Keddie (Scotland). There were only three blocks over par throughout qualifying in the women’s section, two to Angie Brown (England) with 1211 and 1213, and one for Liliane Vintens (Belgium) with 1208.

The final qualification rankings saw Christer Danielsson at the top with 1476, ahead of Paul Cosgrove (1427), and Ron Oldfield (1398). Seventh qualifier, and the last to miss the first finals round was Alan Keddie (1334). The cut for the final 25th place was Auke Broekhuizen (Netherlands) with 1269, a very low cut by ISBT standards. These qualifiers would be joined by six Early Bird, eight Turbo and three Scratch qualifiers in the final stages.

In the women’s qualification, Angie Brown led with 1213, just ahead of Liliane Vintens and Kimberley Oakley (England). Hillevi Huhta (Finland) was the last qualifier through the normal rankings with 1155, these six plus two Turbo and two Early Birds would start the finals on Sunday.

The men placed 8 to 25 and the other qualifiers had an early start on Sunday for the first finals round. Peter Todosijevic (Denmark) won this four game round with 933,
ahead of Lol Ellis (England) and Mike Halliwell (England). Only the top eleven would go forward to the next round, this place was taken by Jürgen Preuss with 842.

The second final round saw the top eleven from the previous round being joined by the top seven qualifiers for a further four games. Björn Bergvall (Sweden) came out on top with 957, ahead of Christer Danielsson and Lol Ellis. Only the top ten bowlers would make the final round, last man in was Mo Singleton with 823.

The final round for the men was a further four game block, with pinfall from the previous round being carried through. Christer Danielsson powered away from the field with a scratch average of 240 to easily take the win. Behind him, Hermann Wimmer took second place, with Björn Bergvall dropping from first to third place.

The ten qualifying ladies also bowled an initial four game block, with Liliane Vintens leading with 882, ahead of Bozena Pajak (Poland) and last year’s winner Bianca Völkl-Brandt. The last qualifier for the final was Ruth Stander from England, who bowled really steadily to average 168, no mean feat at age 83. The top four then played a further four games, again with pinfall carrying through. Liliane Vintens continued to bowl steadily to take a deserved win, ahead of Bianca Völkl-Brandt and Ruth Stander.

The next stop is the Alsace Senior Open, held at Crystal Bowling Wittelsheim, France. The tournament runs from the 27th to 30th April. Full details are available at the ISBT web site, http://www.isbtbowlingtour.eu/