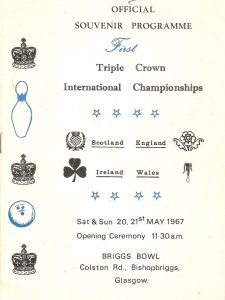 After the first days play in the Triple Crown held at Briggs Bowl, Glasgow, it was almost certain that Scotland would be the first name engraved on the new shields. England bowlers had experienced a tragic day on the lanes, and at the close on the Saturday evening, a quick count up meant the England men, to win the title, had to win each event on the Sunday, and at this point, this appeared to be asking for a miracle.

Although named the Triple Crown this tournament was being contested four-ways, England, Scotland, Ireland and Wales, and bearing in mind both Ireland and Wales have only one centre each from which to call their players, it obviously meant England started as firm favourites.

The inspiration and great sportsmanship of the Welsh party who had travelled for twelve hours in a coach was something that had to be seem to be believed, they made the tournament atmosphere something seriously lacking in bowling.

Their war cry will be remembered by all who attended, and I feel sure that everyone is looking forward to next years event which is to be held in Wales.

In the singles event which opened the bowling. David Pond rolled 224,211 and 217 for a 652 series which proved to be the highest of the event, only Chris Buck backed him up with a 577 series, the remainder of the England Squad rolled under 540 series each, whilst the Scottish men were all recording around 550. At the conclusion the this event Scotland had totalled 551⁄2 to England’s 441⁄2, Ireland 261⁄2 and Wales 231⁄2. 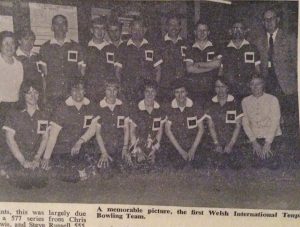 It was a similar story in the Ladies section. Irene Greenhorn (Scotland) had the highest series with 596, closely followed by Peggy Mills (England) with 592.

In the Doubles event England more than held their own in the Mens section and managed to pull back five points, this was largely due to a 577 series from Chris Lewis, and Steve Russell 555. David Pond had his lowest series but still managed 510.

David Rouke took the highest series in this section with 591. Among the Ladies, Josie Leaver with 575 topped all comers.

The Mens Trios followed and once more David Pond rolled the highest series for England 523, and likewise Dave Rourke for Scotland 569.

Scotland at this stage led on points by 971⁄2 to 821⁄2 with a possible sixteen points to play for, plus the bonus points for the five man team event. 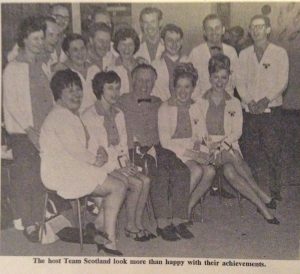 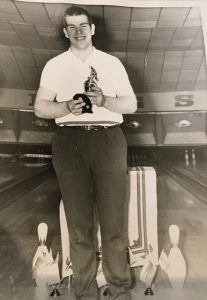 The England Ladies, after the trios were in a slightly better position only 41⁄2 points down on Scotland. The Scottish ladies had certainly given their counterparts something to aim for.

The determination of the men on the Sunday morning to push aside all opposition was very obvious and in the 4 man team event Alex Weeks rolled a 615 series, David Pond a 589, Chris Buck a 559, Jess Morley appeared to be in trouble but managed to keep his head for 480. 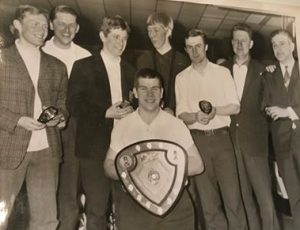 England men are victorious – Photo thanks to Sandie and David Waugh

Scotland bowled very consistently in the first game for a 924 but England had kept that small lead from the start and finished with 953, in the second game Scotland improved and rolled 985, but England with the taste of victory in sight rolled a magnificent 1064 game, and as was expected, after rolling a 985 and beaten by some 79 pins, the Scottish lads must have felt in the position of winning the last game was hopeless.

England ran out worthy winners with 2992 against 2729, a spectacle of first class bowling. 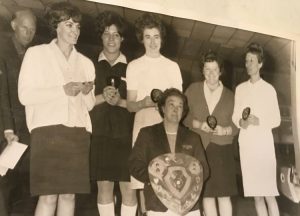 The English ladies were not enjoying the same triumph as the men, in the first game Scotland made 867 which included a great 182 by Tilly Campbell and an even better 194 by Chris Howie, to England’s 787. In the second game Iris Dandy in rolling a 208 helped England to win this game 850 against 810.

For the Irish contingent, Ned Ellis rolled a 569 series in the doubles event and Tony Choy a 561, but considering this is not the team to represent Ireland in Sweden, they, as one might class them the “B” Team, certainly proved they know their stuff in the Emerald Isle. 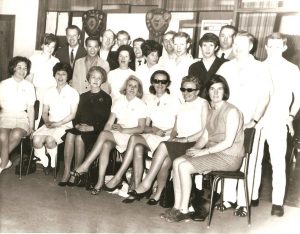 For the “Colleens” Antonella  Murphy as expected, rolled the highest series with 498, closely followed by Eileen O’Connor 482.

The cinderellas of the weekend, the happy-go-lucky, singling Welsh team, had a high series for men by Ted Crocker of 547, and Fred Medwell 539, and in the Ladies section M.Crocker 502, B Evans 471. Analysing the scores, it is obvious from the chart the two Welsh teams bowled better as the tournament went alon, and for many of them was their very first taste of tournament play, and this was at international level.

For Scotland, Dave Rouke averaged 183 for the men and Tilly Campbell 178 for the Ladies.

The banquet arranged for the Saturday evening for the contestants was aresounding success and a big thank you must go to the organisers for showing the right spirit in which to play the game.

The very first Junior National Championships was held in September/October 1967, at Wolverhampton Bowl.  Terry Searle made available a copy of the Manager’s Handbook for the inaugural event which we’re delighted to showcase below:   […]