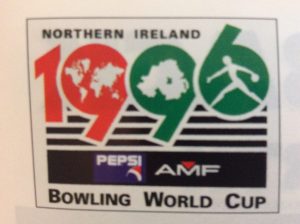 Just around the corner sits the 52nd QubicaAMF Bowling World Cup which, in my opinion, is the finest international singles bowling event ever.

Embracing entries from over 80 countries and running non-stop since 1965, being part of this fabulous event is a dream come true for the national representatives who enjoy unequalled hospitality at famous destinations circling the globe.

This year China hosts the event for the second time after the 1991 World Cup in capital city Beijing. Now the centre of attraction will be the amazing city of Shanghai, now famous for hosting so many international sporting events with great professionalism and integrity. Competition runs October 14 – 23.

It has been a great privilege for me to have worked at 26 of the 52 annual tournaments, firstly at the now defunct Wembley Stadium Bowl in 1966, which hosted the second event, and lastly in Melaka, Malaysia in 2009, mostly working in the media rooms during my days with World of Tenpin and Bowlers Journal International. I also ran media rooms at a few of the events and of them all, the one that will for ever be in my memory is the 1996 AMF World Cup at the Dundonald Ice Bowl in Belfast, Northern Ireland.

Unfortunately, I no longer have the records of this event as I passed on all the stuff I had to Mort Luby of Bowlers Journal, when he wrote a short history of the World Cup.

The Dundonald event sticks in my memory as I was in charge of the media room, which was huge. It ran full length alongside lane number one with windows looking out over the 30 lanes of the Ice Bowl. British media interest included some national press, radio and TV and a couple of sports reporters came to Belfast from national newspapers, one being the Daily Mirror. The political situation at the time and the fact that this was the first time that a world tournament of any sport had been held in the province piqued the interest of all and sundry and this was easily the busiest media room in World Cup history.

Popular Irishman Bernard Gibbons was, as usual, the tournament director, working alongside Ice Bowl manager Harry O’Neill, to produce a first class event with all I’s dotted and t’s crossed. If my memory serves me well, I think there was a total of 70 men and 54 women on the roster which provided a memorable opening ceremony showcased on the ice in the adjacent rink.

Our media room had many international reporters and photographers, the latter led by the hyperactive Japanese gentleman Hero Noda, sporting the very latest SLR cameras and shooting some 8,000 pictures, much to the delight of the local processors at the time.

These were the days before wi-fi being universal. e-mails having to be sent with dial-up connections, so our telephones were in high demand, morning, noon and night.  Luckily, I had an incoming dedicated line so was able to answer the many calls for information and results. Two of the local Belfast radio stations were frequently calling and I had many live interviews through the week. Luckily, I had driven to Belfast from my Southport home and was able to bring all the computer equipment I had, which included a couple of Mac PCs, a laptop and two printers. Those were the days before we enjoyed fully equipped press rooms with wi-fi and all the trimmings.

One of the myriad attractions of the world cup is that all competitors roll 24 qualifying games in both men’s and women’s divisions and by that time all had settled in and very many friendships developed. When the first cut came in Belfast a strong Asian and Australian charge brought heavy media interest and through the final rounds I had up to seven television companies fighting for screen time. One company had the full rights to produce the final programme for AMF so it was difficult to keep them all happy.

Unfortunately, I never did manage to obtain a copy of the finals  which were later shown on Sky Sports. All concerned with the media were up to their eyeballs in getting reports to all four corners of the world and the media room was a veritable madhouse from dawn to sunset. I had never been so busy in my life and was the sole occupier of the room when the dust had settled and all competitors and staff had gone to Belfast city for the farewell banquet. My phone just kept ringing and the local radio stations not only wanted information on the results but also information on the history of the AMF World Cup and the current state of tenpin bowling.

Needless to say, I was exhausted when I could finally leave the centre and I went back to the luxury of the Stormont Hotel and lay in a hot bath. I was just snoozing when my room phone rang and I was asked why I was not at the banquet. I explained that I was just too tired and went back to the bath. Minutes later the phone rang again, insisting that I attend. I refused. Little did I know that somehow they knew it was my birthday and had arranged a ceremony in my honour. AMF vice-president Bent Petersen, who later became a very good friend, never held this against me, but I wish I had taken the trouble to go to the banquet.

I promise you that you have never seen bowling at its very best until you have competed in or even just witnessed the World cup. AMF and now QubicaAMF deserve all available credits for keeping this event, not just alive, but thriving. If ever you get the chance to see it, or be a part of it, grab it with both hands, you’ll never regret it. It has provided me with 26 wonderful memories.

Every Cover of World of Tenpin & Go Tenpin

In August 1997 we saw an end of an era as the UK’s only national bowling magazine “The World of Tenpin” published it’s final copy. One hundred and twenty-seven issues produced by the one and […]