The 2019 English QubicaAMF World Cup Qualifier got under way with an early over flow squad. This squad was sponsored by PDQ Printing Services

The early leader was home favourite Daniel “basher” Bonfield, who despite being shut out still managed to shoot +148 with Paul Dillion 2nd on +123 and Mark Bloor in 3rd on +103. All three bowlers are hoping to make the top 16 and progress to round 2. Jo Green was the sole lady rolling 1033.

The event continued as Glen Relph rolled 1408 to grab the qualifying lead as Rebekah Hamlet jumped to the top spot in the ladies event with 1177. Later in the day Samantha Hannan grabbed the lead with 1224 as Alison Taylor moved into second.  In the mens section Garry Sykes made a move on the leaders placing third with 1335.

Sunday had another block of players on the lanes and new leaders in both divisions as Matt Chamberlain hit 1454 and Issy Allen leading with 1317. The cut landed on Matt Giles with 1266 and Hayley Russell with 1162.

Round 2 had another four games in store for the finalists, Matt Chamberlain took the overall lead with 2316 as Pete Stevenson was second with 2286. Issy Allen took the female lead with 2128 with Hayley Russell in second with 2113.

Round three for the men and matchplay had Pete Stevenson through with a two game 270 average against Jack Sanders who went out with a 253 average. Others through included Chris Oates, Matt Chamberlain and Same Rose.

Semi Finals time for the ladies and Issy Allen and Hayley Russell took out Natasja Ailes and Alison Taylor and advanced to the final with Issy winning 2-1 to become the youngest UK female to play in the World Cup Finals.

In the mens event the final two were Sam Rose and Matt Chamberlain. Matt taking the first game 203-177 then blasting 269 to book his place in the World Cup finals. 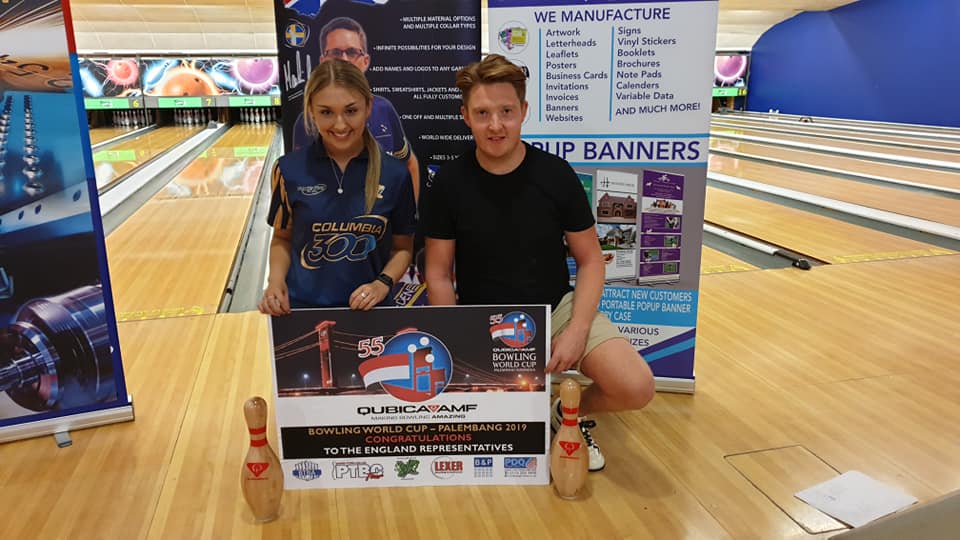 Watch how you win the Bowling World Cup…..FOUR TIMES

The 53rd QubicaAMF Bowling World Cup rolls into Hermosillo, Mexico for a record breaking third time in November. That got us thinking about World Cup records. The first record you need to take notice of […]

Is your country participating in the biggest bowling tournament on the planet?

Is your country participating in the biggest bowling tournament on the planet? Latest updates on World entries FINLAND – Sanna Pasanen and Niko Oksanen on their way to Hermosillo IRELAND – Barry Foley and Carol […]