The fourth stop on the 2019 ISBT tour was the second visit of the year to Germany, this time to Dream Bowl in Böblingen. This attracted an entry list of 67 men and 21 women. The format for the tournament was a single 6 game qualifying block, with unlimited re-entries. For those not able to qualify through the main leaderboard, there were additional opportunities through Turbo games, Early Bird qualification, Scratch scores and a Desperado squad. Age bonus started at age 51 (1 pin per game), then increased a pin for every additional year of age with no limit. As with all ISBT events, there was a separate division for ladies.

There were four days of qualification squads, with two squads per day on the first three days. Wednesday’s squads were headed by German players, with Helmut Ulber being top man with 1497 including age bonus, ahead of Hermann Wimmer. Petra Duplois Laun and Marianne Pelz had great blocks of 1367 and 1330 to ensure their places in the finals.

Thursday saw more high scoring, led by Ron Oldfield from England with 1451, ahead of Stefan Műnschke from Germany with 1428. German players still dominated the ladies’ section, with Gisela Insinger scoring 1287, ahead of Kerstin Neubűser with 1220.

The two squads on Friday saw England at the top, with Steven Jeeves leading with 1489, ahead of Frank Lindsay with 1456. Farida Pascoal-Blom from the Netherlands led the ladies with 1248, ahead of England’s Angie Brown with 1241.

There were three squads on Saturday, the first was taken by Steven Jeeves with 1457, while Liliane Vintens was top lady with 1183 to just squeeze into the top 10 in 10th place. In the second squad of the day, Mike Halliwell from England was top with 1472, ahead of Berny Stőckl from Germany with 1452. Jan Hodge from England found an excellent 1305 block to ensure her qualifying position, just ahead of Karin Lischka from Germany.

The final squad saw many players trying to ensure qualification. Keith Hodge from England joined his wife in the finals by bowling the highest qualification block of the tournament with 1501, ahead of Arthur Dȁhn from Germany. In the ladies’ section, there were 5 players scoring over 1260 in this final block, led by Angie Brown from England with 1297, a few pins ahead of another solid block from Jan Hodge.

The final qualification standings showed Keith Hodge was top with 1501, ahead of Helmut Ulber and Steven Jeeves. The cut for the top 24 who would continue to the finals was Robert Bruce from England with 1382. To these 24 were added 5 Early Bird qualifiers, 7 scratch qualifiers, and two Turbo qualifiers. This left two places to fill from the Desperado squad.

The top 10 women would automatically progress to the finals, led by Petra Duplois Laun with 1367, ahead of Marianne Pelz and Jan Hodge. The cut in tenth place was Lieselotte Wűhl from Germany with 1236. Two Early Bird, two Scratch, and one Turbo qualifier would also make the finals, to be joined by a single Desperado qualifier.

Only 8 men and 1 woman took part in the Desperado. Serhat Dogan from Germany was top with 227, ahead of Bruno Schmitt from France. As only 1 woman took part, Claribel Muis from the Netherlands automatically qualified. After the squad had finished, it was realised that Serhat Dogan had actually qualified on the scratch ranking, so Valentin Fatu from Romania, who finished third in the Desperado, unexpectedly got a place in the finals.

Overall qualifiers 19 to 24, plus all the other qualifiers from the other sections had an early start on Sunday, bowling a 4 game block, with only 10 bowlers progressing to the next round. Uwe Tscharke from Germany had a big win, scoring 1031 over his 4 games, to finish 150 pins clear of the field. The cut for the next round was at 12th place, for Les Grant from England with 897. 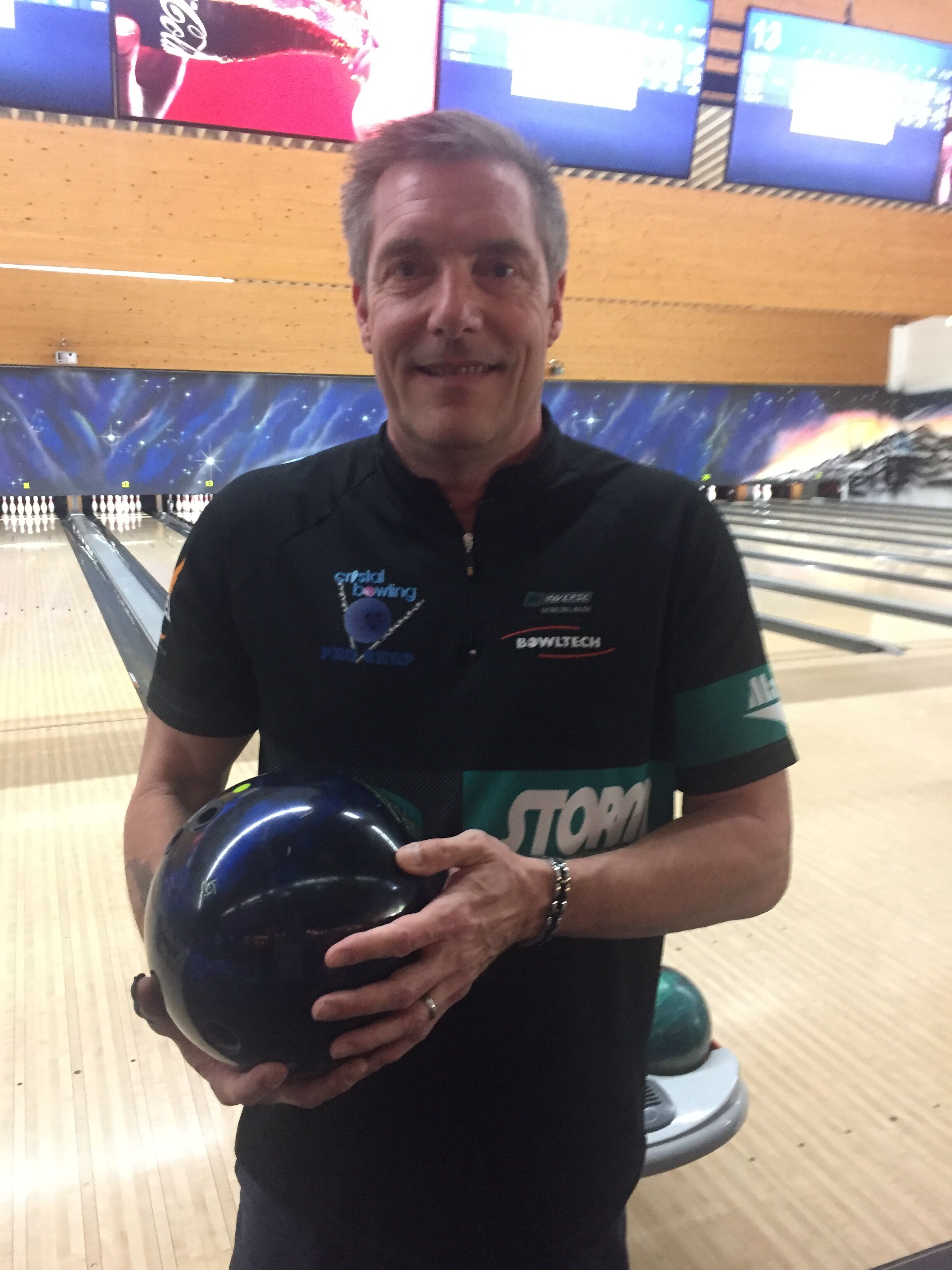 In the second final round over 6 games, Steven Jeeves started with a great 300 in his first game. Alan Keddie took the overall win, ahead of Hermann Wimmer. Steve Carnall from England was eighth place cut on 1413.

In the women’s section, it looked like another 300 was going to happen, Lilianne Vintens had a 299, but the 7 pin refused to fall on her last shot which looked perfect. Marianne Pelz continued to score well, taking the round with 1354, ahead of Jan Hodge. Karin Lischka from Germany was the eighth place cut with 1233.

After a further three games with pinfall carried forward, just the top four would make the final round. The top four places remained the same as the previous round, with Hermann Wimmer leading from Alan Keddie, Frank Lindsay and Lol Ellis.

In the women’s section, it was the same story with the top four remaining unchanged. Inge Hazeleger had a massive 739 scratch block to be the leader, with Liliane Vintens, Marianne Pelz and Jan Hodge remaining the top four.

The final rounds were single game elimination, all the remaining players played one game, and the lowest was eliminated. First to fall in the men’s section was Hermann Wimmer, after tying with Frank Lindsay, but losing by having the lower scratch score. This left three UK players to compete for the title. Frank Lindsay was next to go, which left Lol Ellis and Alan Keddie to battle for the title. Neither scored well during the close game, but the additional age bonus of Lol Ellis was enough to secure him the title.

In the first game of the ladies’ section, previous leader Marianne Pelz was unable to find a good strike line, finished in fourth place. In the next round Inge Hazeleger produced a 261 game, way ahead of the competion. The battle between the other two was very close, Liliane Vintens needed a strike on her last ball to secure second place, unfortunately she only scored six, so Jan Hodge progressed to the final. In a low scoring final match, Jan Hodge did enough to see off Inge Hazeleger to secure her second ISBT title.

The next stop on the 2019 tour is at the Italy Senior Open at Reno Bowling in Bologna, Italy. The tournament runs from the 30th June to 7th July, but first the ISBT Masters championship for 2018 will be held in Böblingen immediately following the ISBT tournament. Full details are available at the ISBT web site, http://www.isbtbowlingtour.eu/ 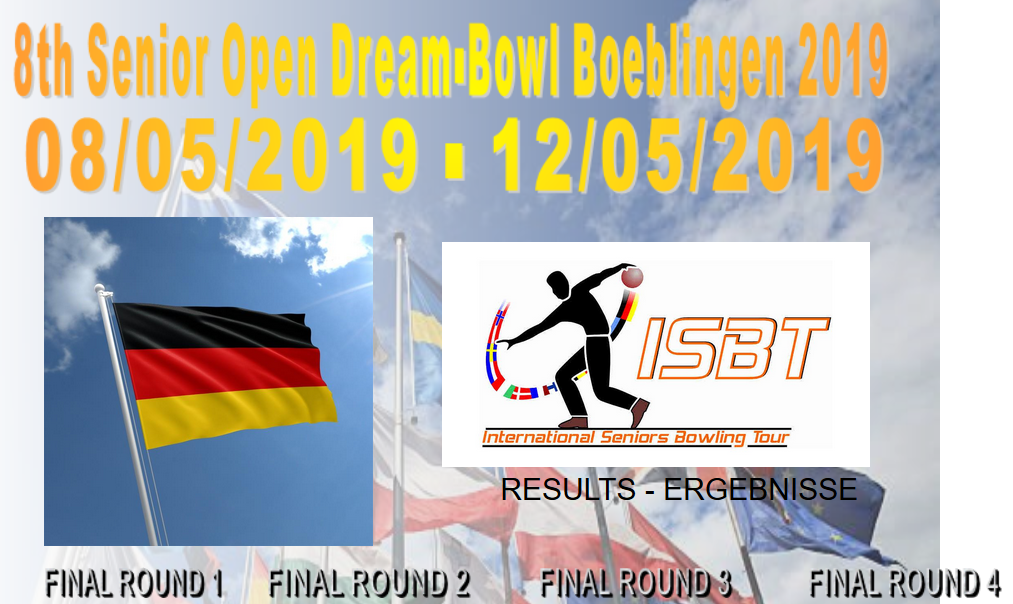 Angie Brown closes in on All Time Senior Winners List

By Alan Turner Wins for Angie Brown and Lol Ellis moved them both closer up the all time Senior list. Angie just three wins behind leader Brenda Pratt with 58 wins. Lol in fourth place […]

Cannot lie, as kids he was known as Lollypop Ellis and known too for being a great bowler. Always there and there abouts in events in a career that has gone from juniors through to […]

Champions: Jan Hodge and Ron Oldfield The eleventh stop on the 2018 ISBT tour was a return to the popular venue of Euro Bowling in Deurne, Belgium, which attracted an entry of 67 men and […]