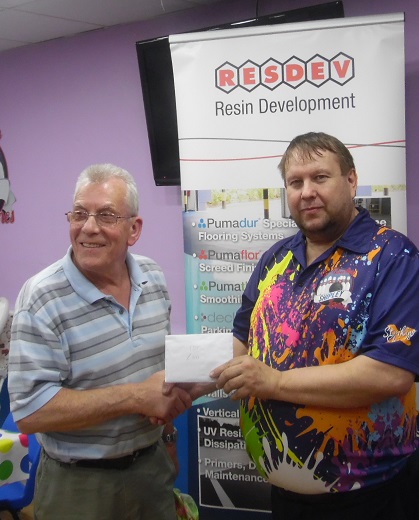 Sunday 23rd April 2017 saw the start of the new season of the Resdev Senior Tour at Go Bowling Shipley, unrecognizable from 12 months ago thanks to the investment and refurbishment programme instigated by new owner Jeff Taylor. And now also with an up to date Flex lane machine.

For this stop a modified Big Ben pattern was put down and the bowlers thrived on it with high scores abounding. Due to some late withdrawals a  total of 39  bowlers took to the lanes over 2 squads, and the most firepower seemed to be with the early starters and it proved to be very exciting to watch.

The format for this as in previous years was the top 4 bowlers in qualifying would rest up until round 4 and the bowlers placed 5 to 20 would be in groups of 4 on a pair of lanes playing 2 games  with the top 2 on a pair plus bonus advancing to the next round, round 4 would see the top 4 bowlers join in to stake a place for the Final. The final would be 2 games with the top bowler plus bonus declared champion.  Squad 1 took to the lanes and after taking a game to size up the lanes the strikefest started, leading the way in game 2 would be the ageless Ron Oldfield striking on the first 10 shots but a frustrating 10 pin leave would leave him with 289, would that be high game of the day?

The man who loves Shipley Gary Barlow then had a run in games 2,3 and 4 of 268,266 and 258, finishing off with 246 in game 6 to post 1470 scratch, 1500 with bonus. This would prove to be the leading score closely followed by Ron with another big 279 in game 5 to post 1470 with bonus. Solid bowling from Frank Lindsay in the first 5 games saw him in a solid position but like Ron he started game 6 with the first 10 strikes, could he outdo Ron? No was the answer as he also faltered on the 11th shot with a 10 pin and a 289 would propel him into 3rd on 1456 with bonus. Other notable scores from this squad were Mick Ince making a welcome return following a long time out with injury posting 1395 with bonus inc 268 in game 4.

Local bowler and new to the tour Ian Kennedy bowling solidly for 1391, a welcome return to form for Les Grant with 1371 inc a 274 in game 2, John Strettle surprising even himself with 1363 inc a 276 in game 3. Others of note Andy Clough 1335, Nick Wright MD of our sponsor Resdev Resin Development 1321.

The question after seeing this top scoring was could anyone in the second squad gatecrash the top 4?. Quickly out of the blocks was the Liverpool Lip Mo Singleton with 246 in game 1 and bowling solidly for a top ten place with 1353, another bowler making a comeback and a pleasure for me that he wanted to try a Resdev stop Geoff Brown from Peterborough Bowling a steady block of games but finishing with a 268 last game to secure a place in the top 4 on 1465. Other notable scores in squad 2  another new bowler to the tour Tony Imren with a solid 1332, Mike (Frosty)Halliwell 1303.

After squad 2 the cut for the top 4 fell at 1456 Frank Lindsay and the 20th place would be another new bowler Dave Broomfield on 1254, just edging out local Shipley bowler John Lawless by a mere 3 pins. Round 2 and the bowlers placed 5 to 16 took to the lanes to try and grab a place in round 3. 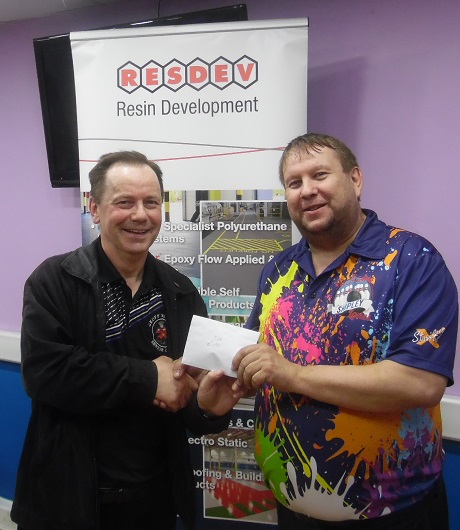 Losing out at this stage along with Jeff were Al Turner 413, Mick Ince 393 and Al Bennett 376, Jeff and Al T Thanks to generous lineage cashing for 9th  and 10th place. Round 4 saw the top 4 from qualifying entering the fray for a place in the final, needless to say both matches were closely contested and very exciting with no player certain of his place until the last frame of the 2nd game. Going through to the final were Mo 498 ahead of Gary Barlow 469 just edging out both Frank Lindsay and Trevor, thanks to a 256 2nd game. 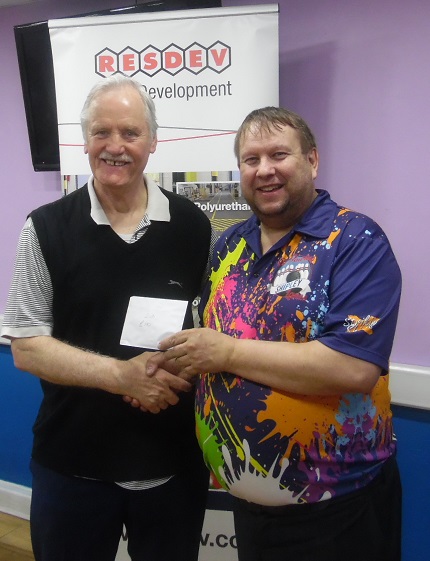 The other match saw Ron Oldfield 465 and Geoff Brown 445 just edging out John Strettle 433 and Ian Kennedy 428 in a tense 10th frame with Geoff hitting 5 in a row from the 7th frame. So it was time for the final but who would be victorious?. Mo and Ron started strongly in the first game as Geoff and Gary struggled to carry and after game 1 Mo 258 Ron 245 had a healthy lead over Geoff 202 and Gary 195, could they be caught?.

The answer was no as Mo and Ron traded blow for blow in the 2nd game and it was still up for grabs going into the 10th frame, Ron struck first but Mo buried his 1st ball in the pocket in the tenth frame and sealed victory from Ron with 505 to 491, Geoff with 243 placed third with 445 and Gary 4th 415. A deserved win for Mo who averaged 236 scr in the matchplay rounds.

My thanks to Jeff Taylor and all his staff at Go Bowling Shipley and he was presented with a framed certificate of thanks from The Resdev Senior Tour by the champion of the day Mo Singleton. The next stop will be on 25th June at MFA Scunthorpe, if you are wishing to enter please contact Jack Smith on either jgs833@outlook.com or on 07905163353. Please note the last squad is nearly full. 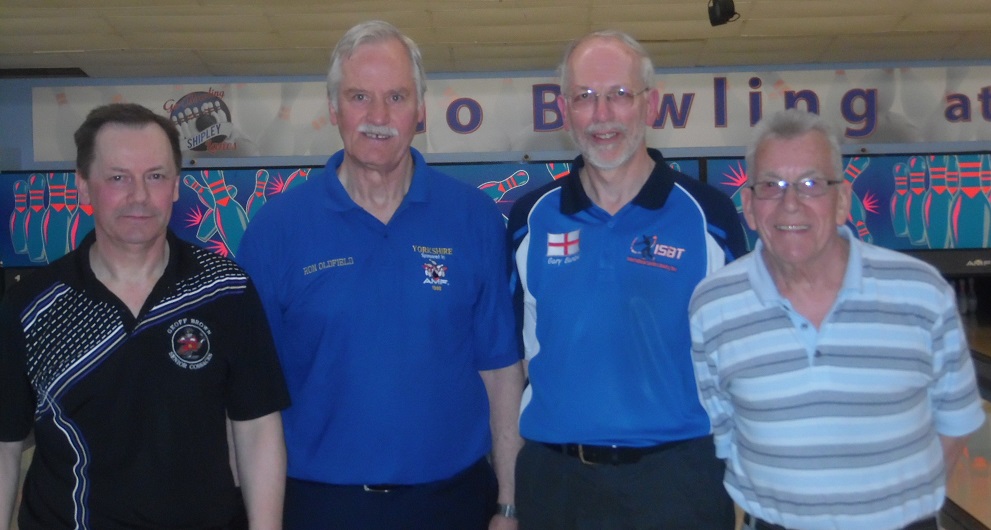 Details about the tour

Sponsored by Resdev Resin Development
⦁ A series of 5 events with a Masters final
⦁ Eligible bowlers aged 45 and above
⦁ Bonus system based on age and average
⦁ mystery score draw, carried over if not won
⦁ Different formats at each stop
⦁ Prize funds based on 30 bowlers

The 2018 Yorkshire U15’s Diamond Trios took place at Go Bowling Shipley on Sunday 22nd July.  Prizes were awarded for 1st, 2nd and 3rd in each of singles, doubles, teams of 3 and all events. […]

The Power Play Shipley Almost New Year Re-Entry Doubles Another Excellent Tournament held at Go Bowling Shipley on the 29th & 30th December 2018. We had a total of 88 teams over 8 squads turn […]