The Irish Tenpin Bowling Association host the 2022 Senior Triple Crown to take place in Leisureplex Blanchardstown between the 8th and 10th April 2022.

Each participating country may have teams of 6 Men and 6 Ladies.

Here we go at last

What seems like an age since the last edition thanks to a pandemic is now forgotten as the Home nations of England, Scotland, Wales, Northern Ireland and host nation Ireland meet up in Leisureplex Blanchardstown for the 2022 Senior Triple Crown.

Friday saw a start in the singles event for the Ladies at 9am for six games in the singles’ Taking the Gold Medal with 1288 (214) was Ireland’s Lorraine Keane. England’s Angie Brown taking Silver with 1271 (211) and Ireland’s Berni Moriarty taking Bronze with 1266 (211). 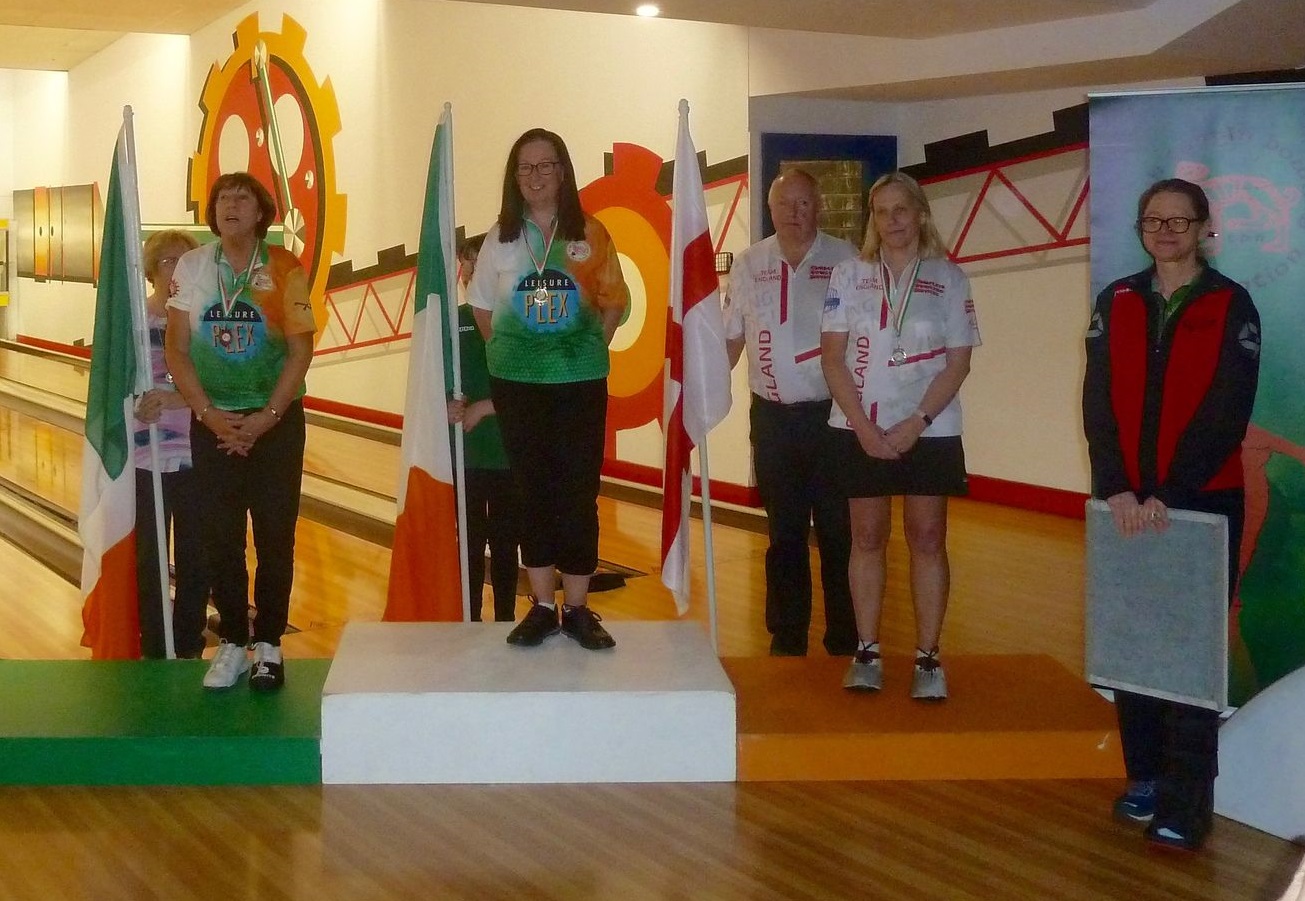 The men were on the lanes in the afternoon and a stellar performance for former England YAC international Colin Grose as he smashed in 1516 to win the Gold medal. That is a 252 average. Taking Silver was Ireland’s Haulie Storan with a fine 1439 (239) and Bronze also went to Ireland as Phillip Watts hot 1396. 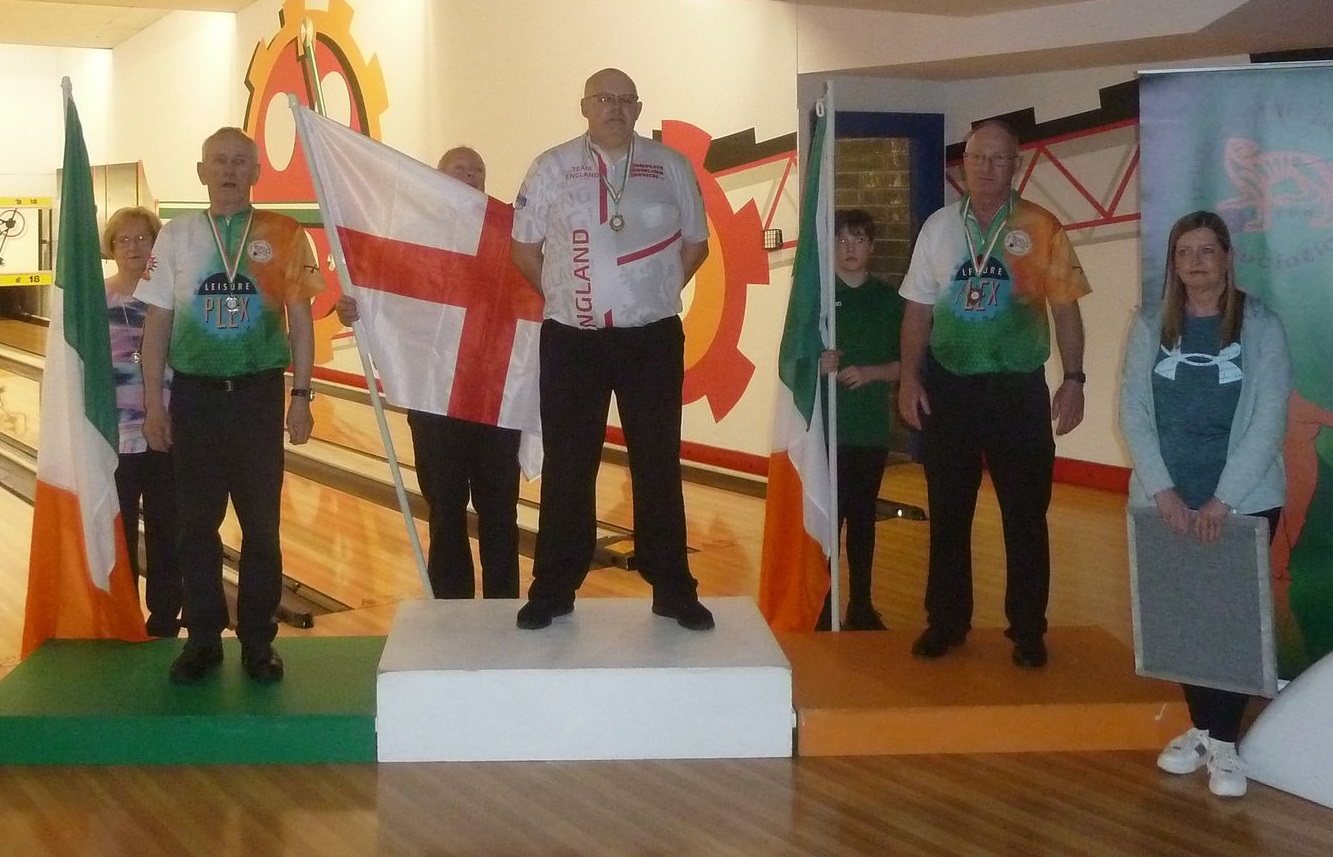 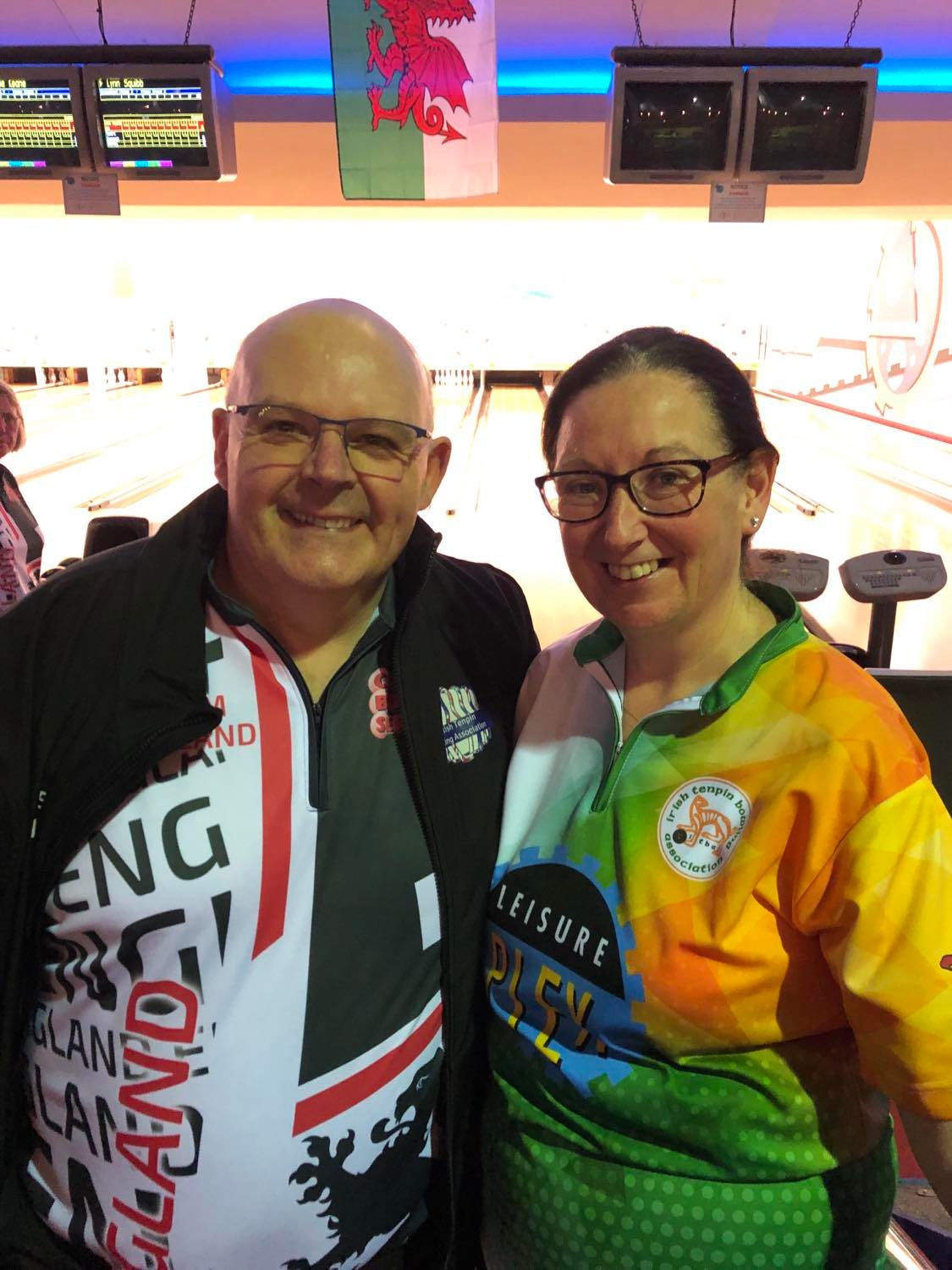 England’s Colin Grose and Ireland’s Lorraine Keane claim the Singles Gold Medals. Both played in the World Youth Championships in Monterrey, Mexico in 1994.

The ladies were back in the late afternoon for three games in doubles and a great day continued for Team England as Jan Hodge (634) and Angie Brown (649) took the Gold medal with 1283 as Ireland’s Dymphna Kestell and Theresa Watts took Silver with 1253 and Bronze going to Ireland’s Berni Moriarty and Martina Shott with 1193. 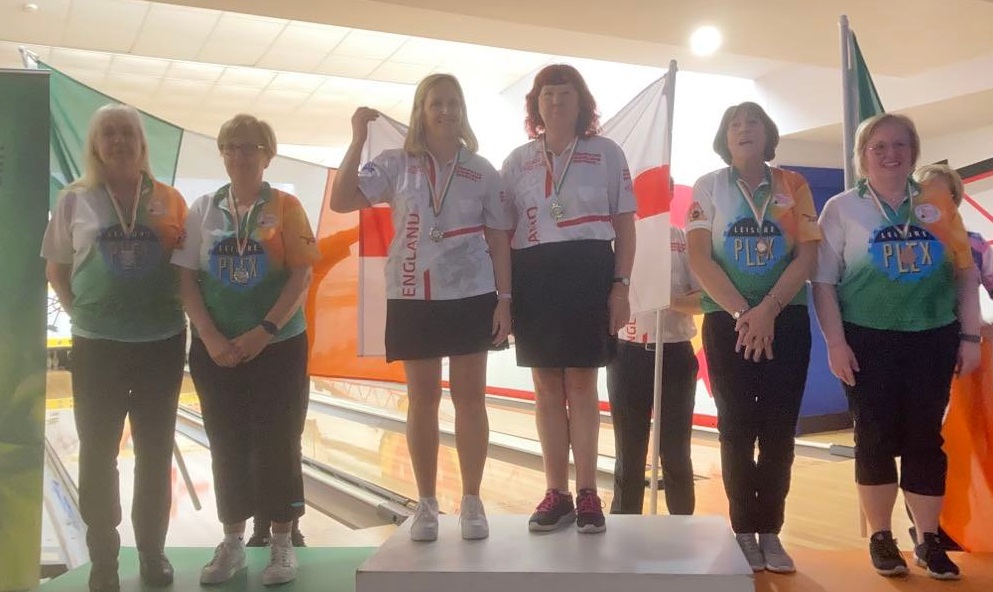 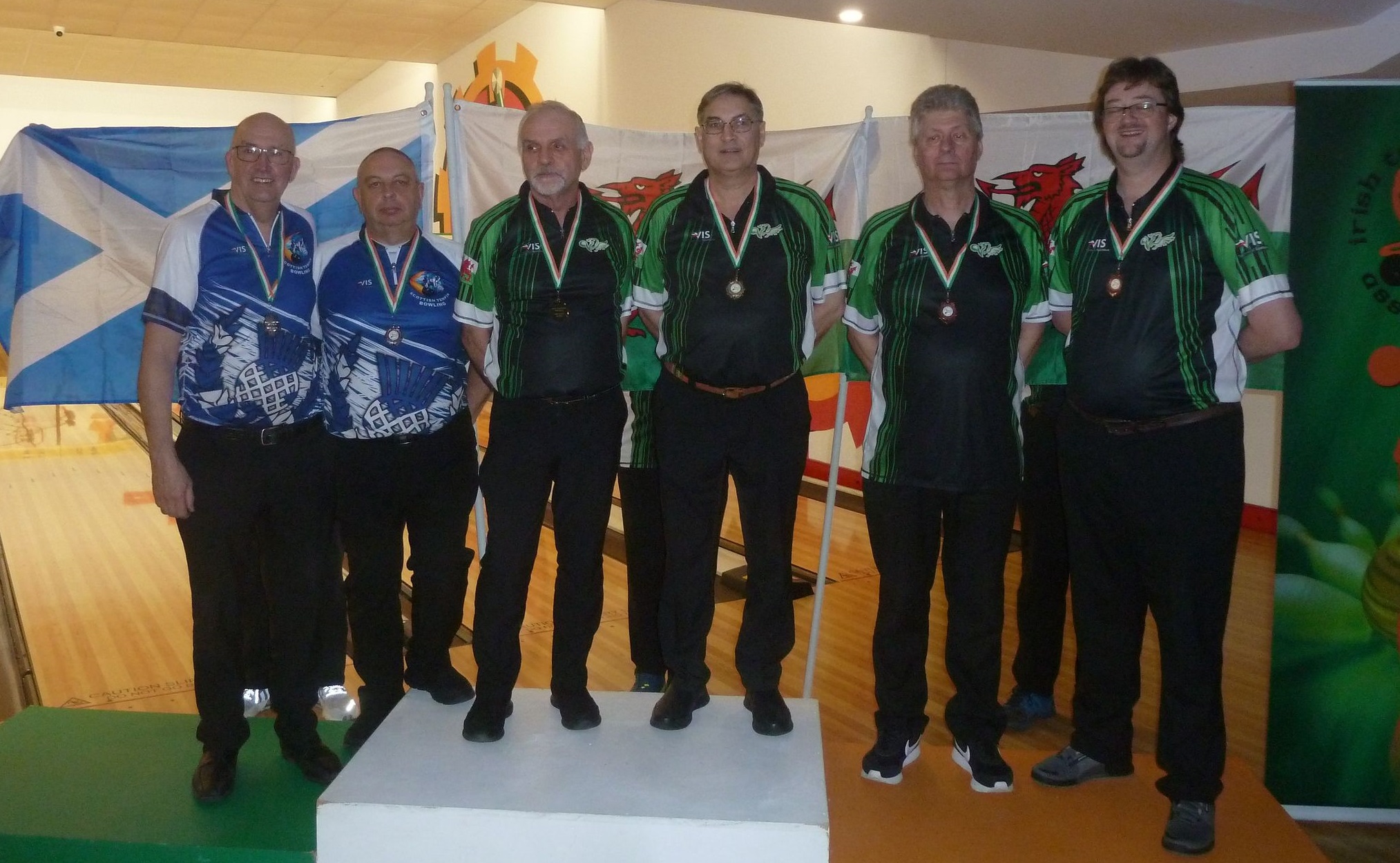 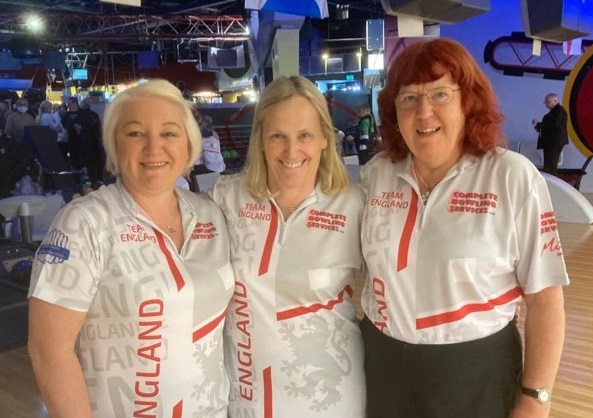 The first thing to report was the fantastic first perfect game of the championships by Guy Lipscomb from Wales. This certainly got the Welsh fired up as they chased down another Gold Medal this week after claiming Gold in the mens doubles.

Turned out to be a spectacular day for the Welsh in the end Steve Williams, Guy Lipscomb and Robert Bruce took Gold with 2060 and Suren Johansson, Peter Noore and Trevor Green taking Silver with 2004.  England Colin Grose, Paul Loberman and Steven Jeeves taking Bronze with 1970.

The big one, everyone wants a medal but winning a team Gold is pretty special and all countries were hot for this one. Wales were flyng at the start with 1128 ahead of England in second with 1056 and Ireland third with 1012. Game two saw England improve with 1072 but Wales slipping with 986 and an Improved Scotland with 1019.

It was to be Gold for England though in the end with England 3195 followed by Wales in Silver with 3187 and Ireland bronze with 3119.

In the Ladies, England were off to a good start with 1005 followed by Ireland just behind on 996 and Scotland back on 862 and a 957 kept the English in the lead after game two with Ireland still close by. It was going to go down to the last game for sure. It did and a four bagger from Angie Brown at the end sealed it for an England Gold with 2944 and Silver for Ireland with 2925. 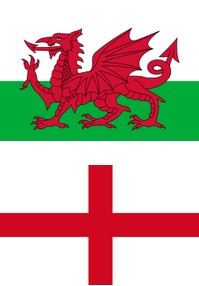 Taking the Gold’s were Gaye McCully for England with 1508 and Wales Steve Williams with 1776. Silvers to Ireland’s Dymphna Kestell with 1503 and England’s Steven Jeeves who also bowled a 300 game on the way to 1724. Bronze to England’s Angie Brown with 1494 and England’s Colin Grose with 1722.

Photos thanks to Paddy Gibbons, Tony Brown and Mike Bergquist. 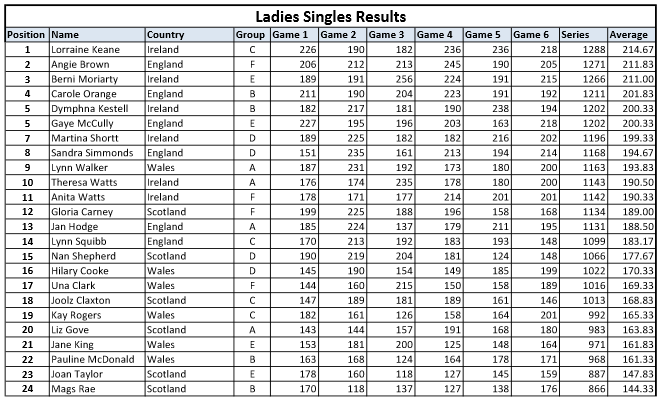 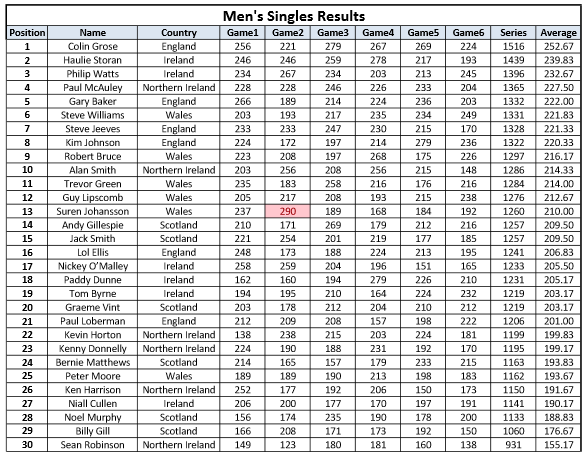 The Senior Triple Crown hosted by England is this weekend (21st to 23rd April) at Acocks Green Bowl. Results to appear at http://tenpinengland.wixsite.com/stc2017