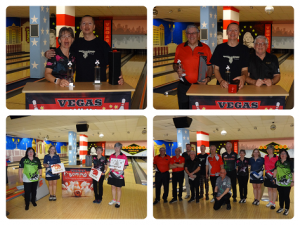 All 32 men played a 5 game qualification block. Top bowler was Lol Ellis (England) with 1168, ahead of Hermann Wimmer (Germany) and Ron Oldfield (England). The top 16 would progress to the next round, 16th place was Les Grant (England) with 1032.

The next round was a four game block, starting from scratch. Lol Ellis was again top with 962, ahead of Carlo Greulich (Germany) and Ron Oldfield. The top 8 would progress to the final, there was a tie for eighth between two Belgians, Dominique de Nolf and Robert Valons. The tie was decided by a ninth and tenth frame rolloff, both players managed to score only 28, so it was replayed. This time, Robert Valons was left needing 8 on his last ball, but managed to only score 6, so Dominique de Nolf progressed to the final.

The final round was a further three games, with pinfall carried forward. Carlo Greulich took an easy win, ahead of Lol Ellis and Roger Pieters (Belgium)

The women’s section had a similar format to the men’s, with 12 ladies bowling an initial five games. Kimberley Oakley bowled well to have a clear lead with 1100, ahead of Farida Pascoal-Blom (Netherlands), and Martina Beckel (Germany). The top eight progressed to the next round, where a further four games would be played, starting from scratch. Martina Beckel had a clear lead after this round with 840, ahead of Angie Brown (England) and Kimberley Oakley. Malou Carola was in fourth place, and was the final woman to make the last round.

The last three games were played on lanes previously used by the men, and the pattern had broken down badly. This was reflected in the low scoring pace. Angie Brown made up ground on Martina Beckel to just take the lead before the last game, but was unable to hold on with Martina Beckel taking the win, Kimberly Oakley finishing in third place.